Have you ever looked in your medicine cabinet and found an expired prescription drug? Did you know that those leftovers are contributing to statewide drug abuse? According to the U.S. Department of Health and Human Services, Utah has one of the highest prescription drug abuse rates in the nation. Volunteers are now joining with law enforcement to help stop this increasing problem.

Thirteen year old Andrew Williams would normally spend his Saturdays playing with friends, but on this Saturday he is working with the National Prescription Drug Take Back Day helpingSandypolice at their prescription 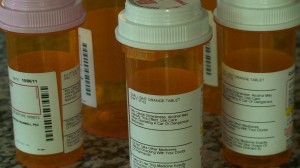 drug drop off. People can give up old or expired drugs to police officers with no questions asked. Andrew wants to get the message out that keeping unused or expired medication in your homes is dangerous.

People becoming more aware of prescription drug abuse is good news to Matt Landeen and people working at drug rehab centers. They know just how far some people will go to get their next fix.

“When you’re withdrawing or when you’re addicted, you’re so uncomfortable that you’ll do anything to feel comfortable again. People go to all sorts of extremes to get money or get the drug itself,” said Landeen.

Sandy police officer Nicholas Roberts said that many criminals are no longer stealing high value items like electronics and jewelry. Instead they head straight to the bathroom cabinets looking for prescription drugs.

“It’s a pretty common thing for criminals to look for in residential burglaries, things like that if you have a lot of medicine in your house…a lot of narcotics,” said Roberts.

Utah’s prescription drug abuse rates are still much higher than the national average…but police say programs like the take back are helping. If you have expired medications, you can dispose of them at any of the drop boxes at police stations.