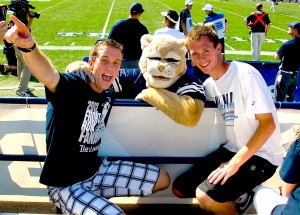 Every Thursday before a home football game, cougar fans have the chance to compete for some seriously good seats. Games like throwing a ball accurately, fishing a penny out of a block of ice, and live angry birds are played to determine who gets to be up close and personal with the BYU athletes.

If you win the game, you receive two tickets to the game and two front row fanatic t shirts for you and your guest to wear. The winning seats can be found in portal Q, section 36, row 1. Rob Tanner won tickets to the Weber State game and said that the seats were prime.

Tanner said, “It was way different then any other game I sat at because it was right there and it was really cool too because at that specific game there were two touchdowns that were scored right in front of us…it was cool to be able to see them catch it and you get a lot more detail of what goes on in the game then what you normally get to see, so it was way exciting.”

Tonight the Cougars wage war against the Hawaii warriors, so the competition was to toss a lei around a tube. The first four to land their lei completely around the tube won the tickets.

Rob Tanner recommends the front row fanatic events to everyone, “Anyone who can should definitely try. It takes a minute to go over there and play the random game and you can win free tickets to something so it’s just a lot of fun.”

If you think you’re fanatical enough to join the front row then head over to the Wilkinson Center Terrace on Thursday at 11AM to test your skills and win tickets to the Utah State game. 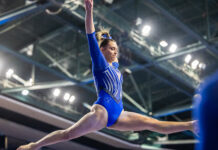