The BYU women’s soccer team is off to a hot start this season thanks to the play of some really fresh faces on the field. The skills of the freshmen on the team prove pressure proof on the Provo pitch. 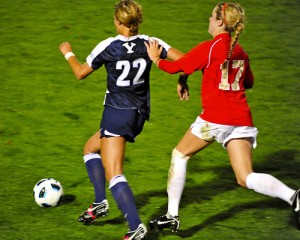 Sarah Chambers says of the team’s success, “This season has started off with a big bang. We’ve won almost everything, except one which was a little unlucky, but that happens sometimes, and we were able to push past it and keep going up and up and up.”

A lot of freshmen spend their spare time at the dorms, but the freshmen on the women’s soccer team spend theirs practicing hard to earn playing time on South Field. Michele Murphy attests to that, “You can’t not work hard every practice. You have to always come ready to work. Playing in the games is amazing.  After that first goal I scored in that first game, I was able to settle down and play after that.”

Their hard work is paying off, especially Michele Murphy’s. She alone scored 13 of the 15 goals this season that came off a freshman’s foot. She says scoring a goal is more to her than just putting points on the board. Murphy says, “Every time I’ve scored, after that it just feels great. It’s even better when all your teammates come up and hug you after and let you know how good you did.” If Murphy and company keep it up, there will be plenty of hugs to go around.

The Cougars’ next game is on Monday against the Oregon Ducks in Eugene. Thursday of next week, they return to Provo and play the UVU wolverines on the South Field.