If you’re a BYU volleyball fan that chooses to sit on the baseline at a game, then you might want to wear a hard hat. Jake Schoof told us, “It’s kinda like going to Sea World, you sit in the splash zone and you know you’re gonna get wet… So you sit behind the players, you know it’s dangerous, you know you could get hit. 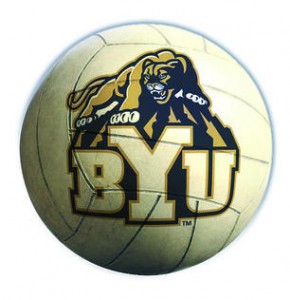 So how can you rise and shout without getting knocked out? “If you don’t pay attention then you get hit but then you learn from it and then you pay attention.” Jake Schoof explains. So if you’re a committed cougar fan and choose to sit directly behind the action at a BYU Women’s Volleyball game, one way to prevent getting hit in the head with a volleyball is wearing a helmet. We asked freshman libero Ciara Parker for her advice to those brave enough to sit so close, “Well, if you sit on the sidelines, in the line of fire, during a volleyball game I’d definitely recommend wearing a helmet. Or you could just contribute to the play and angle your face up, that way we can play off of you!” So if you’re not up for taking one for the team, then you may want to sit further up in the stands.