Provo — The 1600 North interchange of I-15 in Orem is scheduled to close Tuesday night for a two-week period during which crews will repave the ramps and road under the freeway with more durable asphalt.

Officials encourage drivers to allow extra time for their commute and utilize alternative routes such as Pleasant Grove Boulevard and Orem 800 North. For those attending BYU football games, the newly reopened Orem Center Street exit is a good alternate route.

In a press release UDOT spokesperson Mindy Nelson said, “Closing the 1600 North interchange will allow us to complete the next phase of construction more quickly, and it will reduce delays in the long term as we work to finish the entire project by December.” 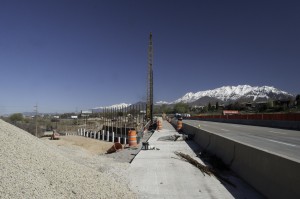 Although alternate routes may not be as convenient as 1600 North for residents, the project has tried to minimize the disturbance by keeping interchanges north and south of the closed section open for use.

Leigh Dethman, public relations manager for the I-15 CORE project, said, “We have a rule on our project that we won’t close two interchanges in a row and although it might add a few extra minutes to your drive, we’re doing the best we can to get in and get out.”

Following the two week full closure, the south end of the interchange is scheduled for closure to complete construction on the northbound off-ramp and southbound on-ramp.

Karli Ferrin, a Sophomore from Lindon studying human development, lives in the area that will be most affected by these closures.This most recent closure joins the long list having occurred over the past two years of the I-15 CORE project.

“It will take me 10 extra minutes to get to Salem where I teach harp lessons so I’ll have to leave earlier. It takes a lot longer to get to a place while they’re working on it, but once certain sections are done it opens up a lot and its really nice.”

Crews began work earlier this summer on all the interchanges in Orem, starting with 1600 North, initially closing just the north end of it.

Heather Friden, a Senior from Orem studying social science teaching, said “They already closed 1600 North a couple months ago for two or three weeks, so this is annoying. I hate it, but they said its going to be done December of this year.”

Officials recognize the disruption this project has caused many local drivers Dethman reminds them “It’s important to keep in mind that although these closures have been inconvenient, we are completing the I-15 CORE project faster than any project like this in the history of the country.