In a packed white-out crowd of 57,045 on Thursday night, BYU welcomed Washington State and their highly anticipated “Air Raid” offense of new head coach Mike Leach, a BYU alumni, and overpowered them on both sides of the ball to win 30-6.

BYU’s defense made this highly anticipated debut a complete bust.

“Obvioiusly I am disappointed,” Leach said after the game in a press conference. “We just had way too  much performance anxiety.”

Washington State finished the game with only 224 total yards of offense. Senior quarterback Jeff Tuel was 30-45, 229 yards with zero touchdowns and two interceptions.  They were also held to minus-five yards on the ground on 16 carries.

In a game which was billed as a showdown between two high-powered offenses, BYU’s defense stole much of the spotlight. 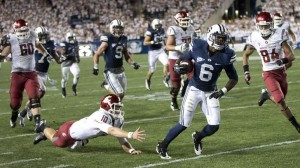 Noy. Junior linebacker Uona Kaveinga recorded the first interception of his career during the first half to go along with five tackles.

Ogletree was asked after the game if the team was scared to face the high-powered attack of Washington State. “We had one of the top 15 defenses in the country last year,” he replied. “I don’t think we have to be scared of anyone.”

A performance which did not pop-out as much on the stat sheet was the play of the secondary.  They held the Cougars star receiver Wilson to just four catches and 61 yards.  He was blanketed all night by sophomore cornerback Jordan Johnson and senior cornerback Preston Hadley.  Johnson, who was making his first start since 2009 when he played quarterback for his high school, intercepted a pass intended for Wilson in the third quarter, continuing to impress after a strong offseason.

On the other side of the ball, the offense rolled for 426 yards of total offense, some of which came in a new up-tempo style.  On BYU’s first scoring drive, they drove 80 yards in 10 plays in two minutes 37 seconds.  The fast-paced offense averaged 15.7 seconds per play, a tempo which caight the Washington State defense on their heels and fueled the offenses’ success.

“Riley is competitive and so tough,” head coach Bronco Mendenhall said after the game. “He demands respect, and when it’s hurry-up, he gets everyone to the line and pushes the ball forward.”

“I thought Riley Nelson really had good leadership there… He really did a good job of that,” Leach also commented in a press conference after the game. “I thought his leadership was one of the biggest weapons they had.”

Junior tight end Kaneakua Friel led the receivers with 101 yards on six receptions, two of which went for scores. “We want to bring back a tradition of tight ends,” he said.

On a night where nearly everything went right for BYU, junior wide receiver Cody Hoffman, who is on the Biletnikoff Award watch list for best wide receiver, went down early in BYU’s second possession with a left-quad contusion and did not return.  He is expected to be at full strength next week and finished tonight’s game with three catches and 46 yards.  He extended his streak to 20 consecutive games with a reception.

In his place, junior wide receiver Skyler Ridley made the most of his playing time as he caught six passes for 54 yards in his first career game.  His first career reception found him wide open in the corner of the end zone for a seven yard score from Nelson.

Freshman quarterback Taysom Hill also started off his career as a Cougar on a high note.  On his first career play, he found Friel open in the end zone for an 18 yard score.

After the game, Leach commented on what it was like to be back and coaching against his Alma Mater for the first time. “I’ve been here back and forth.  You get on the field and it’s not a whole lot of memory lane.  BYU is a team with tradition many decades in the making and something we would like to create at Washington State.”

BYU continues the season September 8 at home against Weber State.  It will kick off at 1:00 and be aired by BYUtv.