LIBERTY, MO — Cate Brinkerhoff is a wife and mother in Kansas City, Missouri. After 13 years of marriage, a mission in England, a degree from BYU and three kids, Cate has some advice on how young adults can survive their 20s and the difficult moments that come with them.

“Don’t stop trying. It is too easy to just give up, or to decide that it’s not worth it to go another day, but it is worth it,” she said. “It is going to be worth it.”

One of the things that has kept up her strength during trying moments is a quote from a conference talk by Elder Jeffrey R. Holland. Like Elder Holland said in his talk, Cate believes that “if the Savior were sitting next any one of us while we’re going through Liberty Jail moments, while we’re in a prision temple, I think He would say something similar to what Elder Holland said in a talk…‘Never give up, don’t you quit. There’s 30 years of happiness along the way.’”

Cate has taken this motto and tried to apply it to her own struggles in life, including when she was in the hospital for three weeks wondering if one of her twins was going to survive or not — an experience she called “a prision temple.”

“I just prayed and trusted that everything was going to be okay, whether that was going to be the result that we would have two babies or just one. I just trusted that it would all go according to His plan and that because we have the temple and because my husband and I were sealed for time and all eternity, that our children would be sealed to us,” she remembers.

During those three weeks, Cate said she was in a daze most of the time. “It was a constant state of change and unrest,” she said.

Her nights were constantly interrupted with nurses and doctors coming into her room as her babies’ monitor would go off, alerting them to check if her baby boy still had a heartbeat.

“I don’t know how I got through that, but every day, with each new nurse or doctor that I would have, they would just comment on my attitude and how positive I was,” she said. “I would say that was because of my testimony and just the assurance that I had of my Father and that everything was in His hands.”

In the end, her family was given a miracle and both her twins were born healthy. According to Cate, God is there in the big moments of our lives, like with her twins, as well as in the small details, such as finding answers to questions like “Where do I move to?”, “‘What am I supposed to study?” or “What am I supposed to do with my life?”

“Personal revelation is vitally important,” Cate said. “There are so many things out there competing for our attention…When it comes to the gospel of Jesus Christ. We will find answers by turning to the scriptures, by reading those scriptures, praying and attending church and seeking the spirit.”

Over her life, Cate has also learned that having doubts is okay as long as you turn to the right sources to work through those doubts. She has turned to the scriptures for strength to focus on moving forward one day at a time.

“It’s a long process, but we don’t have to do it alone,” she said. “There were times that I felt like I was alone, but not completely, because I knew that my Savior was there and that He was there to help me.”

When these feelings of doubt of loneliness come up, Cate tries to read between the lines in the scriptures so the Spirit can tell her what she needs to get out of certain verses and chapters. For example, in the war chapters in the Book of Mormon, Cate was able to receive revelation about protecting herself from the adversary and fortifying her testimony.

She received this personal revelation as she was in the midst of doubting her testimony of Joseph Smith as a true prophet.

“Because I did not fortify myself, like those (war) chapters tell us to — I was not reading my scriptures with real intent. I was not praying with real intent — and so even though I was going to church every week those doubts still crept in,” she said.

After pondering about the issue and talking it over with a friend, Cate knew what she needed to do. “I knew that I would have to pray in order to find an answer,” she said.

Cate waited until she felt like she was ready to bring her question to God and then she went to a quiet place and prayed.

“It was an experience that was very rare in that I have not felt the Spirit touch me in that way, any other time, except once,” she said. “It did pierce my heart where I could say from that moment I know that Joseph Smith saw God the Father and Jesus Christ.”

She knows that praying and turning to the scriptures isn’t always easy. “Not every situation is perfect. I know that there are times where we feel alone, even though we’re sitting at church surrounded by 100 other people,” she said.

But she says these are the times when it’s most important to find answers for yourself. “If we search the scriptures and we pray with real intent, we can find answers,” she said.

Finding peace and comfort through trials of faith 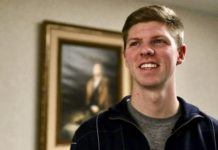 Learning to make time for God