Provo — Defensive lineman Khyiris Tonga has been a big example and has become a leader on this football team, and he hopes to continue his career even after BYU.

Standing at 6 foot 4 inches tall and weighing 321 pounds, Khyiris is a beast on the field and, according to defensive coordinator Ilaisa Tuiaki, “With this game, the bigger and faster and stronger you are the more of an opportunity you have to play at the next level. He’s certainly met all of those requirements.”

Although the ultimate goal is to play in the pros, Khyiris is a key player on this team. His 35 total tackles, two pass break ups, a QB hit, and a sack this season has made him an example to his teammates. Coach Tuiaki has seen this firsthand and thinks “his actions and the way he plays has been the biggest part in how he has led the team. He’s just consistently trying to play and effect the defense.”

But according to Khyiris, his teammates have taught him a lot and have had just as big of an impact. Khyiris says, “They’re just always there to support me, help me through bad times and help me continue to keep my head high, continue to be helpful, and just to be the best I can if it’s on or off the field.”

Khyiris has expressed his desire to play in The NFL, and his goal is to be drafted following this season, but the season isn’t over yet and he isn’t trying to rush the process. He says he’s “taking it day by day. However the season goes, that’s still the dream to be able to play in the league. With that, just graduate, get a degree here, and just finish out my year strong.”

Khyiris and the team take on UMASS next at UMASS on Saturday at 10 a.m. ET. 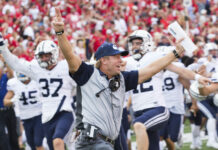 A bond and brotherhood: How 7 returned missionaries are thriving with Stanford football