Since its completion in the summer of 2003, the indoor practice facility has been the hub of BYU athletics, as well as intramural and extramural sports.

As the temperatures go down outside, usage of the IPF goes up, but who gets to use the facility?

The BYU football team uses the IPF for spring practices each year, sharing time on the fields with the golf, baseball, softball, track and field and soccer teams as well.

The facility was first announced by then BYU president Merrill J. Bateman at a football game in September of 2002.

In an article written by BYU Magazine, Bateman is quoted saying, “We have known for a long time that in order to maintain and continue our athletic success, we must provide the very best resources and facilities for our student-athletes. BYU’s new athletic complex will achieve that objective.”

So, was the IPF intended for just athletes? What about other BYU students?

Today, multiple groups, including BYU athletics, intramurals, extramurals and academic classes all work together to schedule the IPF.

“Scheduling the facility works out pretty well, I think most groups are happy to have the opportunity to use the IPF,” said Phil Kelly, BYU intramural director.

Kelly said over 10,000 students participate in intramural sports each year, and a major portion of that group uses the IPF for intramural soccer.

Some disagree with how the facility is used, saying athletes should have full access to the indoor fields.

Former BYU football players Hans Olsen and Ben Criddle have recently commented on the topic on Twitter. Olsen Tweeted that he’s witnessed BYU athletes “shewed off the field” to give time to intramural students.

As for now, the groups will continue to share time at the IPF, providing an opportunity for all BYU students to use the facility. 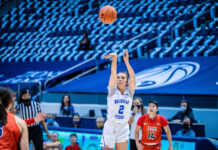 Alley-oops for women’s hoops: BYU basketball is back