This particular piece of music is not often heard or performed, according to Serena Kanig Benish, the community music outreach coordinator for St. Mary’s.

“This quartet was written when Messiaen was a prisoner of war because he was part of the French Resistance,” Benish said. “The other musicians in the prison camp who were musicians were a clarinetist, a cellist and a violinist, along with Messiaen, who was a pianist.”

The BYU quartet is comprised of students who play those same instruments: Adam Woodward on the violin, Jarom Coleman on the clarinet, Max Oliver on the cello and Zac Adamson on the piano.

Benish said the group performed “Quartet for the End of Time” once in December 2018, and because of the “overflow crowd,” St. Mary’s invited them back for a second performance.

“We rehearsed three hours a week during the entire Fall 2018 semester and concluded those rehearsals with three community performances,” Woodward said. “This is an extremely demanding piece, so individually we have contributed a lot of hours of practice.”

Woodward said the piece is not often performed because of its extreme difficulty, but it has serene beauty and endless forms.

“(‘Quartet for the End of Time’) has deep spiritual ties, including scriptural titles for each movement,” Woodward said. “It was written in a Nazi prisoner-of-war camp, and even knowing just that, it’s hard to fathom how someone can write such real music under such conditions.”

Pianist Adamson shared his personal connections to the work, saying the piece is something all music majors learn about in music history courses, yet very few have the opportunity to hear performed live.

“I had to go through the score first without a piano and listen to many recordings to become familiar with it,” Adamson said. “I then tried to analyze as much as I could and find patterns.”

Adamson said the work was special to him because he was awed by the its history and the spiritual and meditative nature of it.

“The piece is very meditative and focused on honoring and pondering the eternity of Christ. Messiaen was a devout Catholic, and his music was a vehicle of expressing his faith,” Adamson said. “To me, it shows the power of commitment to something bigger than myself, even when I am experiencing struggles.”

BYU associate professor Dr. Luke Howard, whose specialty is music history, gave the pre-performance lecture at St. Mary’s. He mentioned there was even a local connection to the composer.

“Messiaen was commissioned to produce a new musical work for the American Bicentennial and was fascinated by the landscape of the national parks in Southern Utah,” Howard said.

“(Messiaen) notated the songs of the local birds and worked that up into a mammoth orchestral work titled ‘From the Canyons to the Stars.’ In honor of his visit, there is a mountain just outside Parowan named ‘Mount Messiaen,'” Howard said.

“Quartet for the End of Time” is a deeply moving work that expresses the composer’s faith while he was a prisoner-of-war in a German camp in 1940, Howard said.

“He used the instruments that he had access to while inside the camp, and it was premiered to an audience of Allied prisoners and German guards. And yet the piece is remarkably positive in its attitude. It’s a piece about the composer’s trust in scripture as a source of hope in dark times,” Howard said. 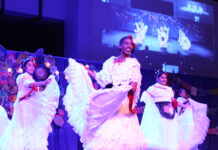 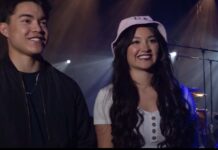