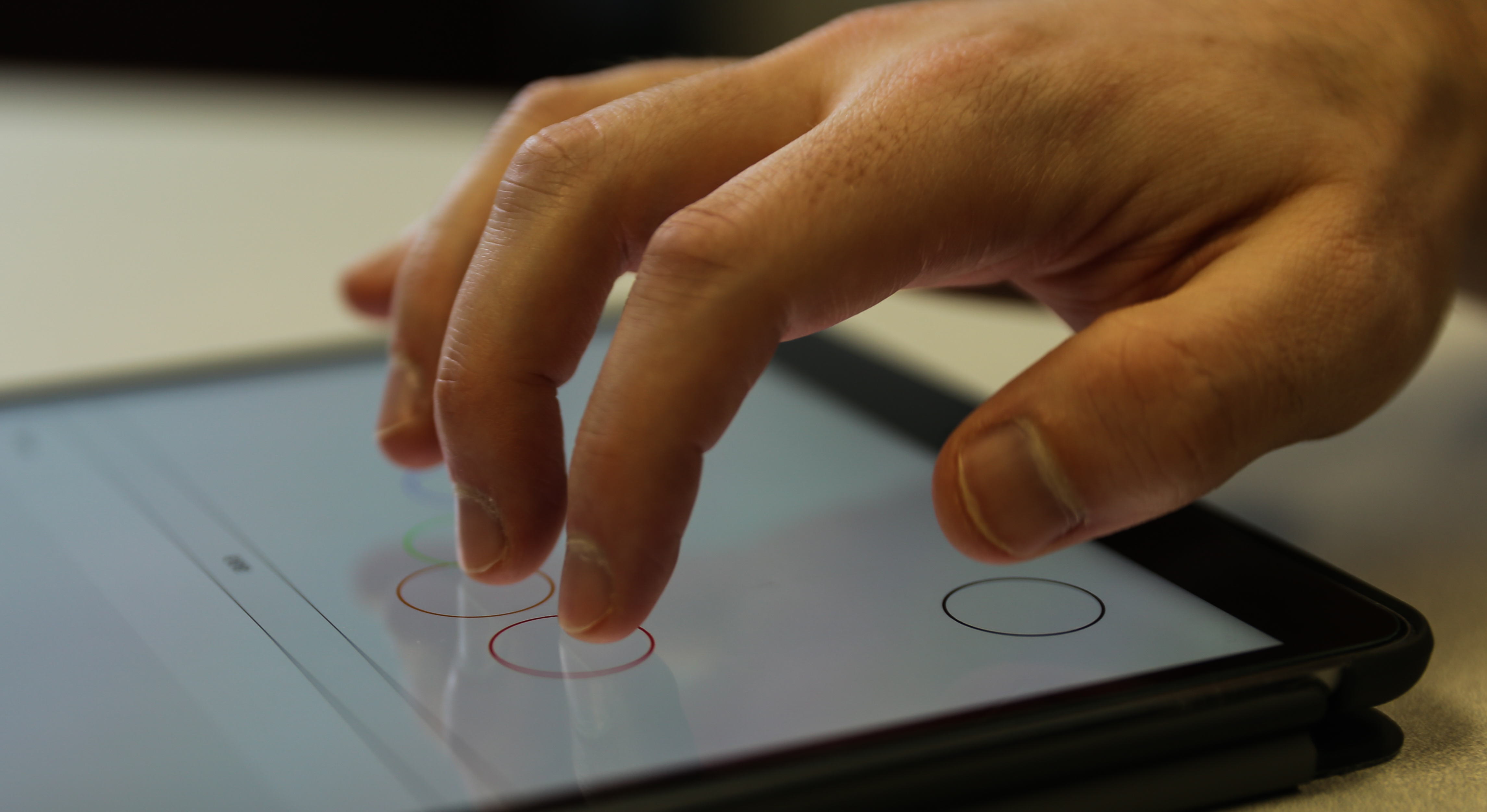 DOTkey is essentially a new way of typing. Rather than having to place fingers on keys, the screen tracks where the user’s fingers are and interprets their gestures into characters.

Jones started developing this as a way to type faster on a tablet. He said typing on glass is terrible because fingers can easily drift and hit the wrong keys. DOTkey eliminates this problem by tracking fingers wherever they go across the screen.

“We don’t realize what we’re missing; we just deal with it because everybody knows its terrible to type on your phone or your tablet,” Jones said.

DOTkey is unique in its ability to recognize which finger is being used, making it better able to recognize the gestures made.

Eric Schofield, who has been the head iOS developer on the project, said the most difficult part of developing the keyboard was creating a system that would recognize different fingers. According to Schofield, this technology didn’t exist before and creating a system that could differentiate between fingers even if the hand doesn’t stay in one place was very difficult.

The gestures that represent characters are produced through a sequence of swiping and tapping using primarily the middle three fingers. The most frequently used characters were assigned to the easiest gestures to make.

The user can use all five fingers while typing, however, the gestures are primarily in the middle three fingers. This is because Jones wanted it to be possible to type on a surface as small as a phone, which is difficult with five fingers.

Watch the demo video below to see exactly how DOTkey works.

The app comes with a training tool. It provides random sentences to type and hints to teach the gestures. Two games have also been developed to aid in learning the gestures and increasing typing speed.

According to Jones, it’s taken most beta testers 30 minutes to an hour to learn the alphabet.

“In terms of its overall success, I would say the hardest thing has been convincing people it’s worth putting in a few hours to learn it,” Schofield said.

But he said the time it takes to learn DOTkey is worth it.

“Now when I don’t use DOTkey on my phone it drives me crazy,” Schofield said.

Though the project started simply as a way to make typing on a touchscreen easier, Jones quickly realized DOTkey could be more important than that. It could create a way for someone who can’t use both hands completely to be able to type faster and more easily.

Jones envisions DOTkey being available anywhere there is a keyboard in the future, not just on the app.

DOTkey beta tester Jason Morris said he has used many different types of alternative touchscreen keyboards, but DOTkey is completely different from all of them. On the other keyboards, he still had to look where he was typing and keep his hand in a certain place, whereas DOTkey tracks the user’s fingers.

“To be able to use one hand while not looking is attractive,” Morris said.

Morris is still learning the gestures, but he said so far the training and games have him moving pretty fast through the alphabet.

The DOTkey app will soon be available for download on the App store.