LaVell Edwards led the Cougars for 29 seasons and turned an unknown program in the West into a national brand while revolutionizing college football with his passing offense.

As BYU honors Edwards this homecoming week, we take a walk down memory lane and look at his accomplishments with the football team.

1962 — Edwards is hired by BYU coach Hal Mitchell as an assistant coach in charge of the defensive line.

1972 — Edwards is named head coach of BYU (taking over a losing record of 173-232-23) and the Cougars go 7-4, with halfback Pete Van Valkenburg winning the NCAA rushing title. 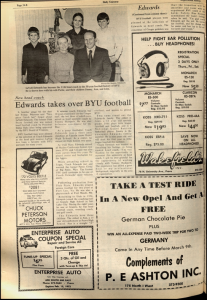 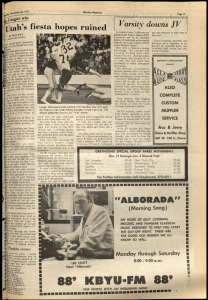 1973 — The Cougars begin implementing the passing game but go 5-6 on the year, Edwards’ only losing season. Quarterback Gary Sheide is runner-up in the NCAA for passing yards. Jay Miller leads the nation in pass receiving (100 receptions for 1,181 yards). 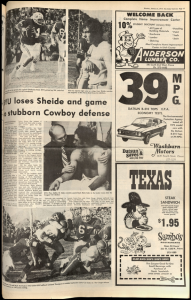 1976 — The Cougars tie for the WAC title and play in the Tangerine Bowl under the direction of All-American Quarterback Gifford Nielsen. BYU leads the nation in passing offense.

1977 — BYU leads the nation in passing offense again and is second in scoring with Marc Wilson as quarterback. BYU is nationally ranked — 16th in the Coaches Poll and 20th in the AP Poll.

1978 — Marc Wilson and Jim McMahon share Quarterback duties as the Cougars go to the first-ever Holiday Bowl, the beginning of 17 consecutive bowl appearances. Edwards receives a doctorate degree in education from BYU. 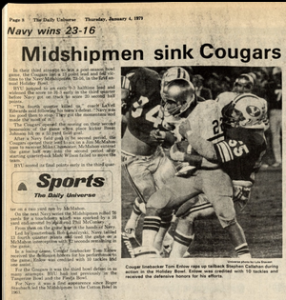 1979 — Edwards receives the Bobby Dodd Coach of the Year award after guiding BYU to an 11-1 record (first time in BYU history the Cougars win more than 10 games).

1980 — The Cougars lead the nation in total offense, passing and scoring for the second consecutive season and go to the Holiday Bowl for the third year in a row. The Cougars and McMahon win their first bowl game in what would be known as “The Miracle Bowl,” beating SMU 46-45, after trailing by 21 points with four minutes to play. 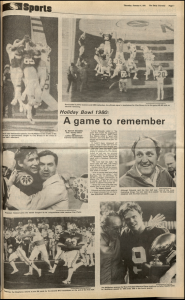 1981 — After leading the Cougars to an 11-2 record and a Holiday Bowl win over Washington State, Edwards coaches the West to a victory in the Hula Bowl. Jim McMahon wins Davy O’Brien award and is a consensus All-American. 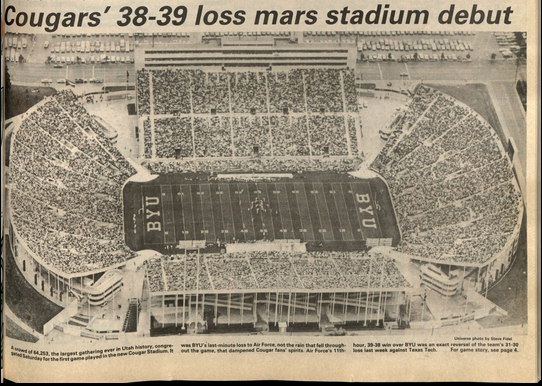 1983 — BYU, under Steve Young, finishes the year ranked No. 7 in the polls, the best ever up to this point. Steve Young wins the Davy O’Brien award.

1984 — The Cougars are the only team in the nation to go undefeated, at 13-0, and win the national championship in Robbie Bosco’s junior season. Edwards is named National Coach of the Year (by Kodak, AFCA, and Eddie Robinson). Shortly after the end of the season, Edwards turns down offers to be head coach for the Detroit Lions and for the Texas Longhorns. 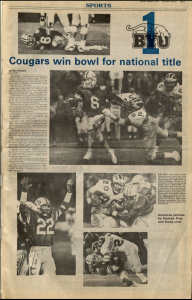 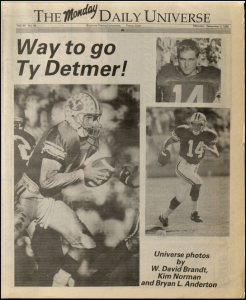 1991 — Cougars tie Iowa in the Holiday Bowl in Detmer’s final game, after finishing the final nine games of the regular season with eight wins and a tie. Detmer wins Davy O’Brien award again.

1996 — The Cougars complete the longest season in Division I history with a 14-1 record after beating No. 20 Wyoming in the WAC Championship and No. 14 Kansas State in the Cotton Bowl, BYU’s first-ever New Year’s Day game. BYU spends 13 weeks ranked in the Top 25. The Cougars finish the season ranked No. 5. Edwards finishes his 19th season with 10 or more wins.

1999 — The Cougars tie Utah and Colorado State for the first-ever Mountain West Conference title and attend their 22nd bowl game under Edwards. 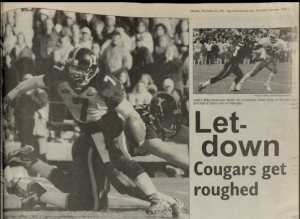 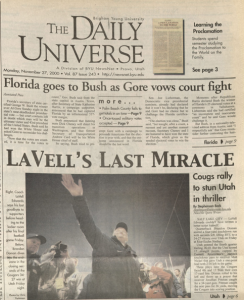 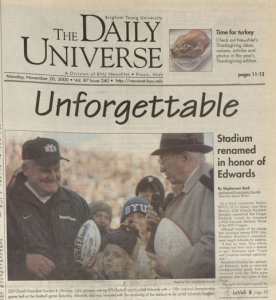 2004 — Edwards is inducted into the College Football Hall of Fame.