When Megan Masako Haley stepped on stage at the age of 14 to play Anne in “Anne of Green Gables” — her first lead role — something clicked. Haley realized performing was her passion and Broadway was her goal.

“For me it was, like, ‘Great. I’m gonna go to college, gonna to move to New York, gonna be an actress. Period,'” Haley said.

Haley was born and raised in San Jose, California, where she lived until she went to college. She attended Elon University in North Carolina for one year before transferring to BYU.

Haley said the decision to transfer was risky but rewarding.

“That was one of the only big life choices I was actually afraid to make, but it was the right choice,” Haley said.

Haley continued her formal training and obtained a bachelor’s of fine arts in music dance theatre from BYU. While at BYU, Haley also performed as a Young Ambassador. Haley said when it was time to graduate, she felt prepared and ready to move on from her college chapter.

Haley said she owes much of her career success to her experience at the New York Showcase, a capstone project for graduating seniors in the acting and music dance theatre majors at BYU.

This opportunity to be seen by agents, producers and other industry professionals served as a jump start to her career.

“Had I moved to the city without that (showcase), it would have been much, much harder,” Haley said.

Within weeks of graduating from BYU, Haley packed her bags and moved to New York City. She quickly saw success in the competitive industry of show business.

Some of Haley’s major career accomplishments include starring as Tuptim in “The King and I” in Chicago, touring the country as Nessa Rose in “Wicked” and appearing on three television shows: “Broad City,” “Blue Bloods” and “Younger.” Haley said performing in “Wicked” was a dream come true.

Although her resume reflects her talent and hard work, Haley, like any actor, has faced her share of rejection. But as her husband, Mark Holmes, said she doesn’t let it get her down.

“She never really gets depressed about missed opportunities. She is always looking toward the future,” Holmes said.

Haley said rejection is just a part of the business.

“You know, I feel like I face rejection so often that it doesn’t really feel like rejection. It’s more like, ‘Oh cool, I wasn’t right for that,'” Haley said. “I audition for hundreds of things every year, so it’s not like it feels personal.”

Her perseverance and forward focus have led to her current role in the off-Broadway revival of Stephen Sondheim’s “Pacific Overtures.” Haley described her current project as very creatively fulfilling.

“This is a production I’m really proud of. It’s been an incredible process,” Haley said. “I’ve gotten to work with Tony Award-winning director John Doyle, who has been working side-by-side with the writers to recreate this masterpiece in a way that is so much more accessible for the audience.”

Haley will perform in “Pacific Overtures” until June 18th and will then take part in a developmental production of a new musical.

Friend and fellow music dance theatre graduate Whitney Uland said Haley has an ambition and drive unparalleled by anyone she knows.

“I really respect and admire her courage and confidence in defining her own path and forging her way through one of the toughest industries in America,” Uland said.

Roman philosopher Seneca is attributed with saying, “Luck is when preparation meets opportunity.” Haley said this quote has personal meaning for her.

“In many ways that I’ve had success, it feels lucky,” Haley said, “But I know it’s because I was prepared and ready for the opportunities when they came.”

Haley offered some advice to up-and-coming student actors who are considering a similar career path.

“Take this time seriously to prepare your craft and also to learn about the industry,” Haley said.

She also encouraged students to take advantage of all of the performing opportunities that are available.

“Do community theater. Be in a student film. Start creating a reel,” Haley said. “Take advantage of the opportunities — there are so many.”

Holmes said Haley has not only worked hard, but also approached the work in a calculated and intelligent manner.

“She has focused more on building and maintaining relationships with certain people and casting offices, which has brought her a lot of work opportunities,” Holmes said.

Haley said she was very proactive about understanding the industry and thinking through the logistics of pursuing a demanding career path.

Haley recently celebrated her three-year anniversary of moving to the city and beginning this journey with her husband. She said having someone to come home to each day helps her maintain perspective of the things that are most important to her.

For Haley, the support and partnership of her husband are more valuable to her than anything else.

“Mark is the most supportive husband ever, and even though he doesn’t like Broadway shows or musicals at all, he always comes to mine,” Haley said.

Holmes said despite his confidence in her talents as an actress, he couldn’t have predicted her level of success.

“Regardless of how much she has worked or will work, I think she defines success as how hard she has pursued the opportunities given her,” Holmes said. 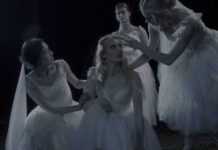 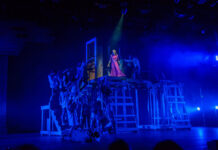