Part Seven – BYU-contracted housing: What to do if you have a problem

BYU alumnus William White experienced a problem many students continue to face in BYU-contracted housing: he did not get his deposit back, and he received no explanation why.

White, a 2010 civil engineering graduate, said this happened at the apartments where he lived from 2008 to 2009 and from 2009 to 2010. He contacted the manager of each apartment, but never received a conclusive response from management or a receipt detailing why each complex kept the entirety of his deposit.

“By the time I graduated, I was just willing to let it go because I knew I didn’t have to deal with it anymore,” White said. “But it was pretty frustrating up to that point. It was discouraging not hearing back on either deposit.”

According to the BYU Off-Campus Housing Office, landlords typically charge a deposit when a student signs a contract. The deposit serves as form of security for the landlord in case the student damages the apartment or does not pay rent. The Off-Campus Housing website says deposits are generally refundable “if contractual conditions are met.”

Landlords can take a nonrefundable portion of the deposit for payments and fees, such as carpet cleaning, but this stipulation must be clearly included in the student’s contract when they pay the deposit, the website says. Off-Campus Housing also notes, “if a deposit is specifically designated for ‘cleaning’ or ‘keys,’ it should then be used only for that purpose.” 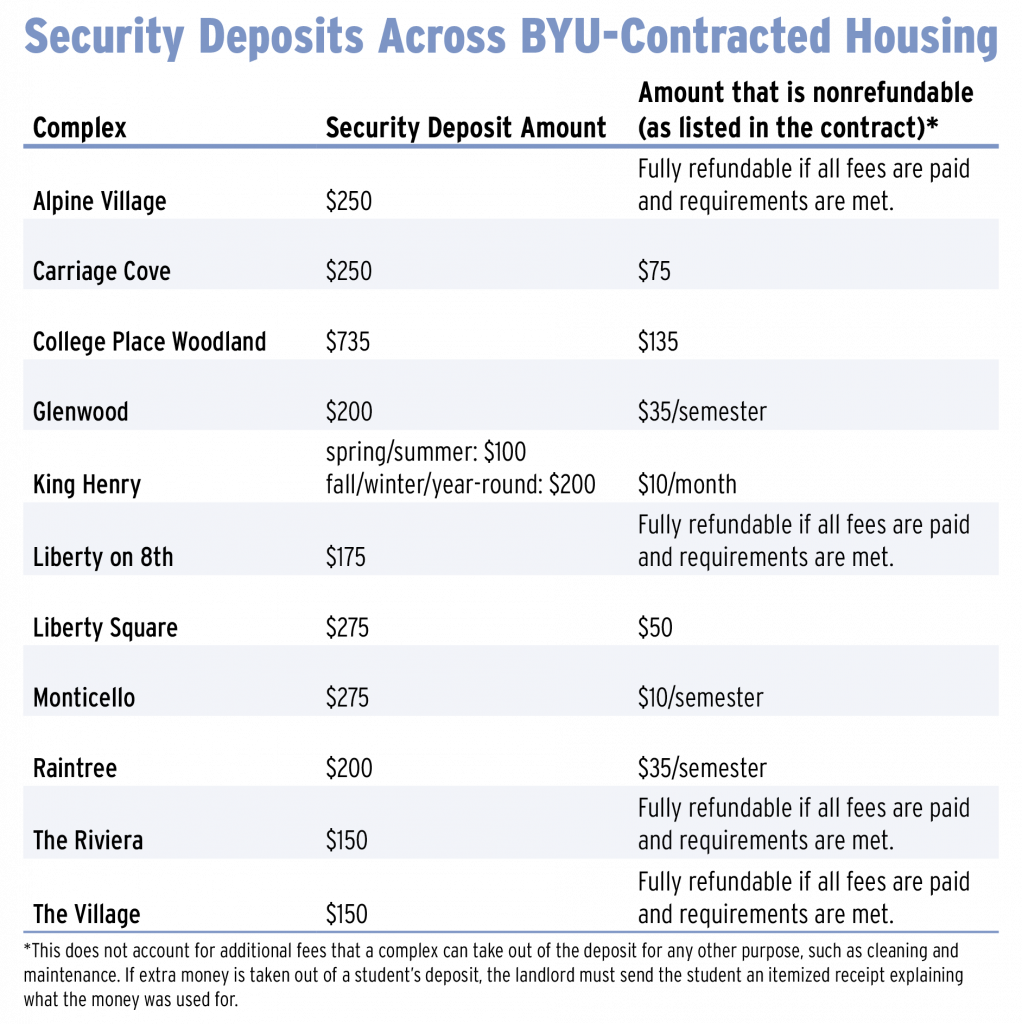 But when landlords take money out of the deposit for cleaning or other improvements — often called a “reconditioning fee” — many students doubt that cleaning ever occurs.

Scott Wiley graduated from BYU in 1985, and his three children have attended BYU — one graduated in 2010, one in December 2016, and the other graduated in August.

Wiley explained each of his children has moved into an apartment where “there is no substantive evidence cleaning had been done,” even in complexes where owners act like they are using parts of the deposit to clean the apartment. Wiley and his wife have even helped their children deep-clean as they move in and out of housing because the apartments were so poorly maintained.

“The assumption is they (landlords) keep the money with the intent of cleaning, but the next kids move in and have the same experience,” Wiley said.

Eventually, one of Wiley’s daughters learned that if money was taken out of her deposit, she could ask her apartment’s management for the receipts for whatever service her deposit was supposedly paying for. The majority of complexes the Wileys have dealt with since this discovery have simply refunded their money instead of providing receipts — as long as the student had not agreed to a reconditioning fee in the contract.

“There has been no fight when we have asked for the receipts,” Wiley said. “Sometimes, they (students) just don’t even bother to ask.”

Utah real estate law requires landlords to give a tenant a move-in checklist to make note of the condition of the unit, time to fill the document out and a written inventory of previous damage to the unit when the tenant moves in. Landlords or their agents are also required to mail a renter’s deposit back to them within 30 days of the tenant’s move-out date. If money has been taken out of the deposit for any reason, the landlord must send the renter an itemized list that explains why each deduction was taken.

For their part, students are required to leave a stamped, self-addressed envelope for the landlord to return their deposits when they move out.

Brittany Larson said she provided students with an itemized list of the charges they had incurred while she and her husband, Chris, managed a BYU-contracted apartment complex from January 2014 to August 2015.

The Larsons started to take pictures of unclean settings and make annotations within their bookkeeping system so they could keep track of the money they were taking from students’ deposits.

Students were expected to have their apartments up to a “move-in ready” standard during cleaning checks — a standard which was much higher than the previous managers’.

If a student was present during the cleaning check, the Larsons would give him or her a chance to re-do a missed step. If a student failed to complete their cleaning check and was not present — either during the semester or when moving out — the Larsons or one of the maintenance workers would then do the cleaning at a rate of $25 per hour per person or job, which was taken out of the student’s deposit.

Even though the Larsons were paid for their labor, they never received the deposit directly; the deposit went to the owners of the complex.

Different owners and managers have different standards, and BYU sets only “bare minimum standards,” Chris Larson said. This means policies, including the amount of a deposit, vary between BYU-contracted complexes.

“When you’re dealing with off-campus housing units, you’re dealing with a private investment of a private entity that’s cooperating with another private entity — that being BYU,” Chris Larson said. “While there were relative guidelines — there’s stuff that’s in black and white in the BYU-student-landlord rental agreement — there’s still a lot that’s left up to interpretation, like cleaning checks.”

The Larsons said they did not always agree with the owner’s decisions, but as managers, they could not go against the owners without possibly losing their jobs. For example, the Larsons suggested several improvements to the complex, which the owner rejected without giving a specific reason.

While Brittany Larson did not necessarily believe the owners treated students fairly, she does not think the owners took advantage of their student tenants; the owners acted in self-interest, but within what was “OK and allowed” by BYU, she said.

“As long as nobody’s causing a stir, they’re fine that the students are being abused,” Wiley said. “The root of the problem is the housing requirement. No one’s made a good argument for BYU housing being some stamp of excellence.”