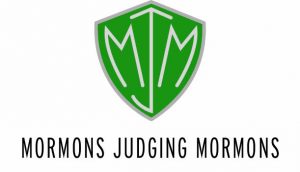 Editor’s note: Members of the LDS Church embrace a theology that includes a daily quest for personal perfection, if not in this life, then in the afterlife. That quest can become toxic if it morphs into self-righteousness and judgment of how well others meet one’s own internal standard. This is the first in a series of stories about the impact such judgments can have on individuals, families and the church as a whole.

“Stop it” was a plea heard throughout the church in the April 2012 General Conference. President Dieter F. Uchtdorf, second counselor in the First Presidency, encouraged church members to stop gossiping and ridiculing, and replace judgmental thoughts with love.

LDS Church members began sharing social media posts and memes about his message, but overcoming the tendency to be judgmental is a challenge. Many judgments and stereotypes continue to persist in Mormon-dominated Utah.

About 66 percent of Utahns are LDS, according to the most recent church membership and U.S. Census statistics. BYU spokesman Todd Hollingshead said more than 98 percent of BYU students are Mormon.

Mormons are often known for their high cultural standards and commitment to helping others reach those standards as well.

Senior columnist with Religion News Service Jana Riess has done extensive research regarding Mormon culture and said Mormons place high value on behaving in line with LDS standards. These high expectations can sometimes be the root of judgments many Mormons place on others, she said.

She said these topics include tithing and the Word of Wisdom. Riess said there are “whole hosts of gray areas,” including modesty and Sabbath day standards, that are not explicitly in the temple recommend questions, but are considered by many people in the church to be barometers of worthiness for other members.

“The good part is that we are a culture that cares about what we do in the world and that our behavior be consistent with our beliefs,” Riess said. “But the bad news is that many times people can take that too far and judge their neighbor in ways that are not appropriate or helpful.”

Riess noted experiences like how kidnapping survivor Elizabeth Smart was “lambasted” for wearing a sleeveless dress in an interview, or how people will be seen shopping on Sunday in Utah and be judged by others for it.

Snap judgments in the Utah County Mormon culture can be extensive. Judgments on the list include whether or not a man is wearing a white shirt on Sundays, has facial or long hair, or does his home teaching; whether or not a woman is dressed modestly or does her visiting teaching; and whether or not a person has a current temple recommend, takes the sacrament, has a calling or posts religious memes on social media. 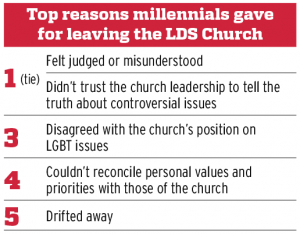 Riess’ interest in the subject prompted her to conduct a study where around 600 former Mormons were surveyed. In her sample of former Mormons, Riess found the main social reason people left the church (tied for first place) is because they felt “judged or misunderstood.”

One woman Riess interviewed for a book said she felt judged in her college years and never forgot it. The woman explained how as a young woman, she was preparing to give a talk in a foreign language (she was visiting Mexico with a study abroad program).

Before Sacrament meeting, another woman from the congregation came up to her and covered the young woman’s legs with her coat because she thought her dress was too short.

This left the woman even more insecure than she felt before. She was nervous to give the talk, nervous to speak in a foreign language, and now she felt exposed, judged and unsure of herself.

Luckily, Riess said, the woman who felt judged was able to use that experience from her college days as a reference point to avoid judging young women she works with now as an adult. She never wanted them to feel the way she did.

BYU graduate Liese Rodgers, from Mission Viejo, California, now lives in Salt Lake where she works full time. She remembers going to Smith’s on a Sunday to get medicine when she was sick. She saw a couple she knew while there, and they joked about not needing to provide an explanation since she was breaking the sabbath, too.

“(In Provo,) everyone around you is LDS and in your ward,” Rodgers said. “You feel watched all the time. You think, ‘Everyone is going to judge me if I go get medicine. They’ll look out the window and I’m coming back with a Smith’s bag.'”

Living in Salt Lake, Rodgers said she doesn’t feel as monitored as she did in Provo. She finds it easier to keep the sabbath, attend meetings, etc., because she’s doing those things because she wants to and not because she feels pressured.

Rodgers said she has had many friends leave the church. She asks them why, and it’s often because when they were struggling with something and came to church, they didn’t feel loved. Instead, they were often sitting alone in the corner with a “scarlet A” on their chests instead of sitting with a support group.

“It breaks my heart, it makes me start to cry,” Rodgers said. “They’re going for the right reasons, they’re looking to feel Christ’s love. Within a ward, that love isn’t just from the Spirit.”

Provo native Greg Vandagriff has had bouts of church inactivity in the last ten years since returning from his LDS mission. The longest consecutive amount of time he was inactive was about a year. Vandagriff said he used to be an extremely judgmental person.

“Everyone is kind of judgmental until life happens to them,” Vandagriff said.

Vandagriff told the story of how his father once told him a non-white shirt looked good on him and said a lot of different things — but it didn’t say humble servant of God. After that, Vandagriff always wore a white shirt to church and judged people who didn’t.

But then “life happened.”

Al Carraway, LDS speaker and author of “More Than the Tattooed Mormon” said she has felt a lot of judgment from people since moving to Utah because of her tattoos.

Carraway said she doesn’t believe the judgmental feelings she has felt in her life derive from Mormons as a whole, but are more unique to Utah culture. Carraway was baptized in New York and said she felt accepted, excited and loved. But when she moved to Utah she said “people were so mean.”

With her tattoos, Carraway said she always knew she looked different than the prophets had said Mormons should look, but as a new convert to the church, she had never felt judged for it by members in New York. Before she moved to Utah, her friends warned her not to because they said she wouldn’t fit in.

Her first day living in Utah, Carraway said she was carrying a church book and a man tapped her arm to get her attention and said, “Pretty ironic looking the way you do holding that book.”

Carraway said this comment broke her heart “into a million pieces.” She had just gotten baptized, upset her family, left all her friends, gave up everything for the church and was trying so hard, she said.

“And man, you feel lasers,” Carraway said. “When you know someone’s staring at you, you can just physically feel it. I felt these lasers in every direction.”

Carraway said she would get rude comments, dirty looks at the grocery store, parents shielding their children from the sight of her and people just walking away to avoid her.

She said she was shocked that in her new religious family in Utah, she was treated poorly when it was members of that very same religion who taught her principles of love, acceptance and service to others. She felt confused.

“I couldn’t even go to the grocery store without feeling so awful. I felt I was treated like the modern-day Korihor, just by looking at me,” Carraway said. “It hurt so bad.”

However, Carraway said she doesn’t believe it’s worth it to get offended and leave the church or be afraid of coming back to the church just because of feelings of judgment.

“Everyone judges — member of the church or not. No matter how righteous you are, you’re going to make these mental judgments,” Carraway said. “There’s no way we can stop that.”

Carraway said people can change the way they view judgment from others by not allowing themselves to be bitter. She said the looks and judgmental glances haven’t stopped, but she has learned not to notice them, and not take it personally or get offended.

This story is the first in The Daily Universe “Mormons Judging Mormons” series.