SALT LAKE CITY — A former BYU student who was convicted for having a meth lab in his apartment in 2014 was arrested again on Friday after a roommate said she smelled a “strong odor of chemicals” and called the fire department. 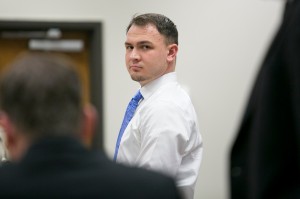 Bryce Austin Cazier, 23, was arrested for investigation of operating a clandestine drug lab  and “admitted post Miranda to operating a meth lab,” the document says. He also faces a parole violation charge, according to jail records.

On Nov. 7, 2014, police found the meth lab in Cazier’s bedroom in the Riviera Apartments just off the BYU campus after his roommates said a fire broke out in Cazier’s bedroom the day before. The roommates helped put out the fire. Cazier then left to visit a friend in the hospital, according to a roommate. Several roommates then picked the lock on Cazier’s bedroom door and discovered alcohol containers and “a lot of sketchy things,” one of them told The Daily Universe.

Cazier soon after told the Daily Universe in a text, “No comment. The only thing I will say is the news has it wrong,” and his attorney would later say the materials in Cazier’s bedroom were for making soap.