“In a Facebook post Monday afternoon, Durrant acknowledged the site – created by his son – was not a good idea,” reported KUTV.

“A week before my address, my son obtained the ponderize.us domain name and subsequently created a website to offer t-shirts and wrist bands to highlight and extend the ponderize message, which we have long talked about in our family,” said Brother Durrant on Facebook. “Although we didn’t invent the term, as far as we know our use of it is unique. Because of the backlash he received in associating a commercial venture with a General Conference talk, he initially lowered his prices to cover his costs and then decided to keep prices as originally set and to donate the profits to the missionary fund of the Church. Ultimately, he decided to take down the website last night. The site will remain down. I was aware that my son was creating a website related to the topic of my talk. I should have stopped the process. I did not. That was poor judgment on my part. Of course, none of the Church leaders were aware of the site. I offer a sincere apology to any person who was offended in any way by the site.”

According to LDSSmile, the site will be down indefinitely.

Although it seems as the controversy behind Brother Durrant’s Ponderize talk has settled, some are not quite so sure.

Recently, photos of BYU’s bookstore have shown that they are selling Ponderize shirts. 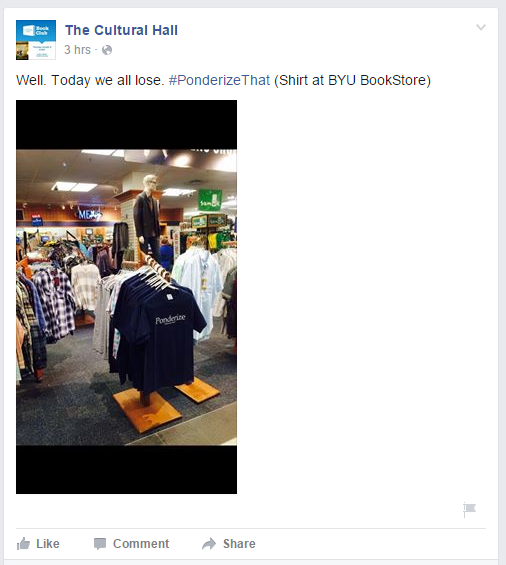 “That is why people got upset about the web domain,” Facebook commenter Kimm Patterson said. “They wanted it to make money on.” [sic]

Most of the comments online recognize that the bookstore regularly sells conference related products, felt like the shirts were simply a matter of bad timing.

Others saw no problem with the shirts at all.

“The shirts don’t bother me,” said Michelle McCullough. “In fact, I would probably buy one. I love being connected to other faithful people ‘anxiously engaged in a good cause.’ Deseret Book advertises right after conference. We sell CTR rings in large quantities. I don’t feel like the Durrants have any malice at all. But we can’t say they (or the BYU bookstore) are the only entity to ever capitalize on the church.”