BYU websites were inaccessible due to a system-wide crash that occurred last week, just in time for the first week of Fall semester classes.

“A large portion of our campus infrastructure was affected,” Lepinski said.

Lepinski said students around campus were unable to access Learning Suite and other important portions of BYU websites. He said that the system crash resulted in students being unable to find their classes, buy their books from the BYU Store and access homework from Learning Suite.

BYU student Tyson Hutchins said he missed one of his classes due to the hardware failure.

“I couldn’t log onto my account to see where my class was,” Hutchins said. “I walked around everywhere looking for it.”

Other students like Hutchins had similar issues when trying to access their account online. BYU freshman Jayden Hammond said he had a difficult time trying to get information about his classes. 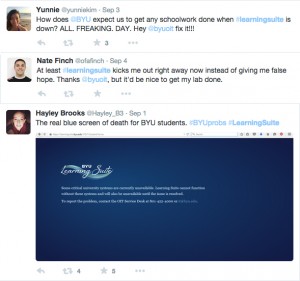 “I was an hour late for my class because I couldn’t see where it was or what time it started,” Hammond said.

Learning Suite was the main concern for most students. Many classes on campus post class information on the site, including homework, schedules and class resources.

BYU freshman John Fluhman said his homework schedule was thrown off because of the Learning Suite crash.

“I couldn’t get onto Learning Suite to do my homework, so I went home instead of working on it,” Fluhman said.

BYU’s OIT department was flooded with support calls and complaining students. Employees began to realize what had caused the problem after the calls and emails they had received.

“Basically there are two main servers and one of them crashed, resulting in us having to transfer all the data from the crashed server to the other,” said BYU OIT employee Mark Roberts. “It was crazy for everyone working.”

Immediate action was taken by the department to try and resolve the issue as quickly as possible.

“Everyone was working overnight including myself,” Lepinski said. “The engineers were here for over 24–hours working on the problem.”

The BYU OIT Communications Facebook page had been updating students with the situation’s status throughout the entire week.

BYU OIT confirmed that the situation has been resolved and the website was back and fully functioning as of Tuesday, Sept. 8.

“We are making sure we don’t encounter another problem like this again,” Lepinski said.

Problems with Learning Suite and the BYU website have been common occurrences in the past. Engineers in the BYU OIT department said that they continuing to make adjustments to improve the quality of the website to prevent any future issues.