BYU grad Erik Roner skydived from a lawn chair elevated by helium-filled balloons in a YouTube video from Feb. 5.

Roner and friends equipped a lawn chair with 90 helium-filled balloons and multiple cameras. Each balloon was about five feet in diameter. Roner explained his desire to make the jump in one of his YouTube videos.

“This is something I’ve wanted to do for a really long time,” Roner said. “Who hasn’t thought about getting lifted up by balloons into the sky?”

With an abundance of cameras attached to his body, a few more attatched to the chair and a shotgun in hand, Roner anxiously popped baloons one by one before floating too high. As the chair rose, so did Roner’s anxiety. 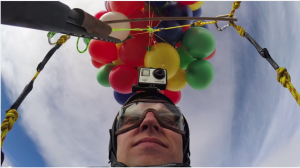 Roner shot the balloons until the tether connecting the balloons to the chair were severed and he began to freefall. In the video the chair flipped over, and leaving him with just his shotgun, his camera and his parachute. He deployed his parachute and safely descended back to Earth, ditching the gun on the way down.

Skydiving in general can be dangerous, even more so from a lawn chair held up by balloons. The popular action camera brand GoPro was behind it all. Both YouTube videos were filmed with GoPro cameras. For the actual lift off and jump, GoPro cameras were attached to Roner’s body and chair to capture the stunt from every angle. The jump and subsequent videos of the jump were a creative form of advertising intended to increase sales of the versatile cameras.

Advertisements featuring extreme feats or stunts have seen an increase over the years, and there does not seem to be an end. Although, not all who saw the advertisements felt the need to buy the respective products. BYU nursing junior Becca Cowan acknowledged that the ads were impressive, but did not affect her.

“I would maybe feel like a more legit person if I could do those things (in the video),” Cowan said. “But at the same time, I know I’d never go skydiving off a lawn chair or anything else like that. I wouldn’t use a GoPro for those things; it would probably just sit on my shelf.”

Though not all may be sold on the stunts, extreme advertising campaigns have made their mark on the public. Similar advertisements and promotional videos released via YouTube and other social media outlets have made GoPro cameras very popular in the past few years. According to Forbes Magazine, the company’s gross margins rose from 33.3% in 2013 to 44.3% in 2014.

Popular energy drink brand Red Bull sponsored a world-record-breaking jump from the Earth’s stratosphere, known as Red Bull Stratos in 2012. Similar to Roner’s stunt, Austrian skydiver Felix Baumgartner, flew up 24 miles above the Earth with the help of a helium-filled balloon before jumping. On the way down, Baumgartner broke the sound barrier as well as five world records.

“When Red Bull did (Stratos), everybody wanted to know if this guy was going to live,” said BYU AdLab director and professor Pat Doyle. “The stunt was huge, but did it pay off? Yes. Did the guy almost lose his life? Yes, but we all wanted to see it.”

Dangerous or not, the companies are getting the results they want. The action-packed sales campaign worked for Red Bull. According to Advertising Age Magazine, after Stratos, overall sales in the United States increased 7 percent to 1.6 billion. As the demand for these products grows, it seems natural that more of these advertisements will be released.

“You’re probably not going to have Crest toothpaste doing these extreme events,” Doyle said. “But I think if it fits with the tone and nature of a particular brand, you’ll see more of that.”