SALT LAKE CITY — Two LDS Church apostles and members of Utah’s LGBT community, along with key lawmakers, announced what some are calling a “historic” compromise to balance religious liberty rights with non-discrimination protection for lesbians, gays, bisexuals and transgender individuals. 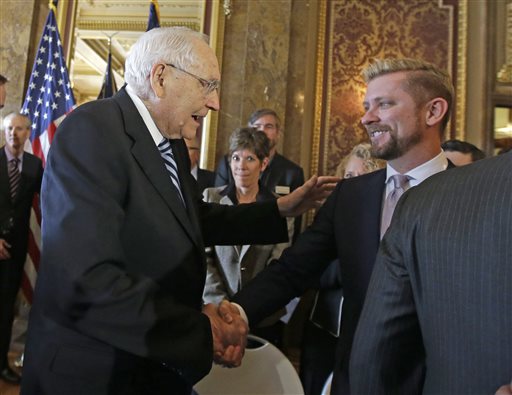 All endorsed SB296 and its protection of rights for all Utahns. The bill will get its first hearing Thursday, March 5, at 8 a.m. in Room 250 of the Capitol Complex’s Senate Building. The bill only has a week to make it through the Legislature, which closes on March 12.

“It is better that both sides get most of what is desired than to have a winner-take-all approach where one side loses,” Christofferson said. “The Church of Jesus Christ of Latter-day Saints is pleased today to support SB296, antidiscrimination and religious freedom amendments.”

The bill’s joint Senate sponsors, Urquhart and Adams, both spoke on the importance of the bill as a bridge between the LGBT community and people of faith.

The bill specifically deals with issues of employment and housing, trying to balance the controversial issues regarding rights of employers and employees, regardless of an employee’s religious beliefs or sexual orientation.

“Faith can move mountains,” Urquhart said. “Today we announce to the people of Utah, the nation and the world, that we commit to move a mountain.”

Speakers regarded SB296 as a historic step. “I think it’s monumental that we’ve been able to do that today,” Adams said. “If Utah can do this, it can be done anywhere else in the nation.”

Dabakis, co-founder of Equality Utah, also spoke at the news conference, emphasizing his gratitude at the unity of all parties, and the strides taken in holding civil discussions about important and sensitive issues.

“This is our message to the world, that we can take tough issues, one of the great social issues of our time, and we can be reasonable, we can be respectful, we can be civil, we can find common ground, and we can make Utah an even greater state,” Dabakis said.

Troy Williams, executive director at Equality Utah, said that the bill reflects unity within the community. “The legislation that we pass this session will provide hope for thousands of LGBT youth living in Utah.” said Williams, “We will send a message to them that you belong in Utah. This is your home.”