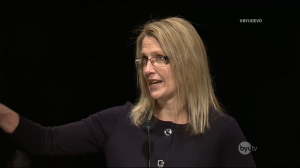 Nielson began by expressing how much she loved living in a college town. Wherever they went, she seemed to run into students who would stop and say hello. Because of this, her son started to believe that she was famous. When he asked his mother, of course she answered “yes.”

Nielson shared an experience she had while earning her Ph.D at University of California, San Diego. Her faculty adviser, a Dr. Perrin, had asked her to replicate experiments that a finishing graduate had worked out. The experiments were being prepared to be published in the Journal of the American Chemical Society, a top journal in Nielson’s field. When she finished the experiments, her results were the complete opposite of the original findings.

“My failure to replicate felt like evidence that I was terrible in the lab,” Nielson said.

After working hard and conducting a number of similar experiments, Nielson and Perrin had to eventually publish another paper in the same journal, retracting the previous claims with the correct conclusion. Nielson told the audience she had learned a lot from this experience.

“This experience confirmed to me that experiments help us gain truth; that we can become stronger from struggles,” Nielson said. “I believe that life experiences, which we might also call experiments, are meant to enable us to grow and become Christlike.”

Nielson illustrated the value of experiments by sharing an experience she had while researching in Uganda. The largest university in East Africa had only two students declare themselves chemistry majors out of the 40,000 who attended. Nielson said the reason most students aren’t chemistry majors is because many secondary schools lack the equipment for labs where students could observe chemistry in action.

Many see chemistry as theory and rote memorization. Nielson and her team made it their goal to give the schools simple, water-based experiments that students could participate in during class.

Through this, Nielson pointed out a connection between experiment, experience and trial. Students normally think of trials as difficult times in their lives. In science, though, trial means more than that.

After being given time to practice, the group with the two targets was more successful at hitting the targets compared to the group with only one target. Nielson related this to the Plan of Salvation, suggesting that students have the “ability of doing and becoming from a multitude of experiences.” Satan’s plan only gave us one range.

Nielson took the audience back to her mission days and brought up an experience she had with her favorite companion. When they talked to people about the Word of Wisdom, her companion was able to connect with the investigators because she had a problem with it before she converted. Her companion was able to testify of the importance of the Word of Wisdom because of her personal experiences.

Nielson was able to learn from her companion and pointed out that we don’t always have to experience something to gain knowledge from it. Those around us can aid us in experiences.

Nielson said the way we are praised can affect our mindset when carrying out experiments. Professor Carol Dweck completed a study at Stanford University in which two groups of students were given the same task, but the praise they received after was different.

The study taught that a growth mindset sees creativity, artistic ability and other traits as flexible, which increases continual practice. The fixed mindset tells thinkers that the traits are inherent and can’t be fixed. Nielson used her daughter as an example of the two mindsets. When her mind was fixed, she didn’t excel in her running, but when she shifted to a growth mindset, she made huge improvements.

The last two points Nielson hit on were (1) letting others help and (2) embracing experience without fear. When people let others help them, they can learn so much more than if they did it alone. Nielson said she left her expensive sandals on the front porch of a house in Uganda. The shoes were gone when she came back out. At first, she thought they were stolen, but moments later, a lady came around the corner with her shoes completely cleaned.

“The shoes only mattered to me now because they had given me the experience of seeing kindness of strangers and realizing again that any hard thing I have done in my life was through the help of God and others,” Nielson said.

Nielson closed with a story of a rabbi who chose to be positive. He had experienced a stroke and was paralyzed from his feet to just below his eyes. With love and support from his family, and having a positive outlook on the situation, Rabbi Ronnie Cahana was able to slowly gain feeling in his arms, the ability to breathe on his own and the ability to talk again.

With that, Nielson concluded her talk with one final thought: “Let’s use our life experiments with Christ’s help to turn theory into reality.”

Education Week: Get good at stress, get good at life

Education Week: BYU professor shares how to teach teenagers the importance of service