SALT LAKE CITY– Diego spends time at the Capitol building happily interacting with the public while still evaluating their safety. He helps the Utah Highway Patrol officers detect bomb threats and respond to other incidents in the state of Utah. One might see Diego walking around the Capitol building with his tail wagging and tongue hanging out– because Diego is a German Shepard. 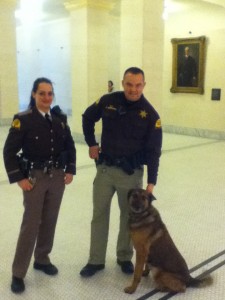 Diego is a bomb sniffing dog for the UHP. He spends his time evaluating bomb threats, and sometimes he is called into action to assist other law enforcement groups throughout the state of Utah. He takes part in regular bomb sweeps in the Capitol as well as random sweeps that check for threats within the building.

He notes that while there is a period of time when the dog undergoes formal training to become certified, training is still an everyday thing. Diego is constantly being run through training exercises even on slower days.

Beardshall keeps him close so that the training becomes second nature for the dog. And although the job of Diego is very important and it is important he stays focused it is important for Diego to be social with people as well.

Diego is the perfect blend of work mentality and social personality, Beardshall said.

During the committee meetings in the morning, Diego was happily walking around wagging his tail, he he watched students pass by in the Capitol.

Both the military and police forces want dogs who will do the work but at the same time, not attack everyone who gets close to the officers.

Diego originally came from Holland. Beardshall said that a number of Utah Highway Patrol officers went over to Holland to purchase dogs for law enforcement in the state of Utah. The reason for going to Europe is because they breed some of the best dogs for military and law enforcement service.

In Europe, they have very strict laws and stipulations about breeding dogs, in order to preserve the breed and the family line of the dogs — as well as preserve the important legacy of the dogs and their contribution to military and law enforcement action.

Diego is just one of many dogs in the service of law enforcement in the state of Utah.

“I love working with the dogs. I wouldn’t have it any other way,” Beardshall said.

WalletHub ranks Utah as the second best state for teachers