The Visa Freestyle International has come and gone at the Deer Valley Ski Resort, and it was an exciting and successful one for USA athletes. Three discipline competitions wrapped up in just three nights at the famous slopes in Park City.

The disciplines jumped off with men and women’s mogul competitions on Thursday night. Patrick Deneen took third for men’s moguls behind some tough Canadian competition who took both first- and second-place podiums. Deneen’s finish added yet another win to his 13 career World Cup podium collection and placed him in sixth overall position in the World Cup rankings.

The USA women’s team dominated the moguls with a podium sweep. Hannah Kearney, Heather McPhie and Eliza Outtrim achieved only the second USA women’s sweep in history. McPhie and Kearney now hold the fifth and eighth spots in the overall World Cup Rankings, respectively. Outtrim landed her second podium of the season, the first just days before in Calgary. Deer Valley’s steep and difficult mogul course was no match for Kearney in her impressive comeback. 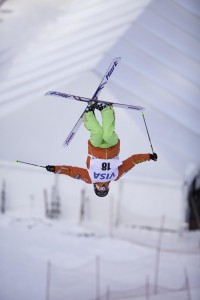 “I’m stronger than ever,” Kearney said. “This sweep proves how hard we train and how talented our team is, this should happen more often.”

Aerial competitions had some highlights of their own on Friday night. Women’s aerials were dominated by international competition that included two podium finishes from China. USA athlete Emily Cook finished seventh, and teammates Maddie Olson and Kylie McKinnon finished close behind in ninth and tenth.

The USA team did not fail to make an appearance in the men’s aerial competition. Eighteen-year-old Mike Rossi landed his first career podium with a huge full-full-full.

“I didn’t expect this at all,” Rossi said. “This podium gives me so much confidence because I know what I’m capable of.”

Rossi still considers himself a rookie in the sport. In fact, this year is his first World Cup circuit. Normally athletes adjust their game plans after each round of competition, but Rossi said his plan didn’t change going into the finals and worked out to his ultimate advantage. Canadian aerialist Travis Gerrits took second for the men’s aerialist.

The event closed with the dual mogul events and even more spotlight on the USA team. Hannah Kearney took yet another first-place podium for the women’s team that sent her above teammate Heather McPhie into second place in the World Cup rankings.

“I was a little nervous to come back to duals,” Kearney said. “But as soon as it was time to ski duals I was really confident. I sometimes felt too comfortable which probably means I should have been skiing faster, but there is a fine line between skiing too fast and too slow but I think I found the right balance tonight.” 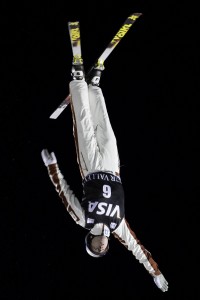 For the men, Patrick Deneen snagged a second-place podium next to teammate Bradley Wilson, who took home his first career podium for third. Both finished close behind Canadian Alex Bilodeau but managed to outski the yellow bib recipient, Mikael Kingsbury.

“It’s a dream come true to podium here at Deer Valley, my home mountain,” Wilson said. “The best results of my career have been in duals so far. Nothing can push you more than the guy skiing next to you.”

The USA Freestyle Ski Team gears up to head to Sochi, Russia, the next stop in the FIS World Cup Tour.