Law students and faculty shared some laughs and raised over $700 for The Center for Women & Children in Crisis at a “Stump the Professor” event on Jan. 18.

BYU Women in the Law has been organizing this annual fundraiser for The Center for Women & Children in Crisis since 1992. The center offers a long list of services to survivors of domestic abuse and sexual assault, including shelter for up to 30 days, food, clothing, and case management help.

These problems are very relevant to BYU and the surrounding communities. The Utah Department of Health reports the problem on its website: “Rape is the only violent crime in Utah that occurs at a higher rate than the rest of the nation. One in three Utah women will experience some type of sexual assault in their lifetime and one in eight will be raped. 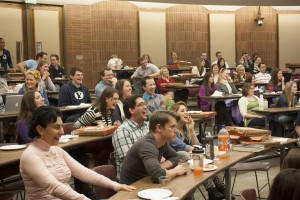 The event itself was relaxed and students enjoyed it.

“It’s nice to see the professors outside of the classroom and talking about something outside their specialty…It’s just nice to see them as real people and engage with them in a different way,” Sarah Jenkins, a first year law student, said.

Students tried to stump their professors with questions about topic ranging from The West Wing television series to the name of Bella Swan’s baby in the Twilight book series.

James Gordon, a faculty member and Assistant to the President, served as a witty emcee.  Particularly loud laughter accompanied his response to a question about Justin Bieber’s birthplace in London, Ontario.

“I thought he was actually made by Mattel,” Jones said.

The panelists were also a big hit, and showed a remarkable willingness to be silly. Some students did not even ask questions, they just requested that the professors dance or sing. Perhaps the loudest roars of laughter and approval came when two professors danced “Gangnam style.”

Wendy Archibald, Assistant Dean over Student and Internal Relations at the law school helped organize the first of these fundraisers for the Center for Women & Children in Crisis as a student in 1992. She also said that this event is “a good way to sort of build community at the school and let students relax from what are otherwise very intense studies.”