A month ago nobody had heard of a 23-year-old college student with bright red hair named Stuart Edgington. Today, however, 18 million people and counting have seen his YouTube mistletoe-kissing prank. These days his friends and fellow mistletoe bandits Nate Turley and Kaitlin Snow are stopped on the street by strangers who ask if they can kiss them.

It all started when Edgington and his fellow seekers of mistletoe truth went to the Wilkinson Student Center during finals week and asked unsuspecting students a series of questions about their Christmas traditions. At the end of the survey, the participants were afforded quite a surprise: they were asked if they practice the mistletoe tradition even as a mistletoe appeared above them and the interviewer leaned in for a kiss — or a slap or an awkward stare. All the interviewers wanted to find out was if anybody still practiced the mistletoe tradition, and they were overwhelmed by the amount of kisses received. 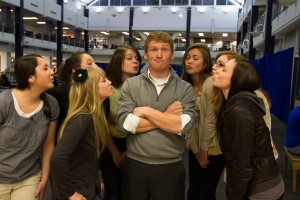 When asked if the prank was awkward, recent BYU grad and mistletoe accomplice Snow said, “The mistletoe-kissing prank was definitely out my comfort zone, but once I got in front of the camera and started asking people questions it wasn’t bad. It was definitely more awkward when people rejected me and said no than when I actually had to kiss people. Kissing people was kind of awesome. It would have been weird if it had been at the end of a first date with someone I barely knew, but somehow the fact that it was with a stranger made it okay to kiss them. I just kind of went with it.”

Edgington has been on TV with news stations to answer questions about his kissing video and has been interviewed by Fox News, ABC 4, CNN, and many others. Edgington is humble about all the attention he has received and made sure to point out that he hasn’t been on the Ellen DeGeneres show yet. Apparently once you’ve been on Ellen you’ve made it to the big time.

Snow experienced her fame differently than Edgington. “The weekend that it came out I went to my brother’s wedding,” Snow said, “and all my aunts and uncles said, ‘Hey, Kaitlin, good job on the video; we saw it,'”

“My dad had his phone out and was showing family and friends. It was really weird. This should not be something that my grandpa, father and aunts should be congratulating me on. Having bruised lips from kissing strangers, usually that’s not a good thing. It was weird that my dad was proud that his daughter kissed all these strangers. That’s what was weirdest. I definitely had to get used to that.”

“Originally Stuart suggested that we go to UVU to shoot the video, but I was too scared that those UVU boys would kiss me too intensely, so I felt a lot more comfortable filming the video at BYU because I knew there would be gentlemen,” Snow said.

Snow explained that while she was filming she saw a really cute boy with a red sweatshirt who tilted his hat up in an attractive way. “He had seen an elderly couple kissing under the mistletoe and he was walking away, and I was like, ‘Dang it, Stuart, you ruined it for me!’ He was half way down the hall, and I yelled, ‘Do you want to take a survey?’ He turned around and came back; I was really excited. He was definitely a very attractive man. I should have gotten his number but didn’t. I need to search for him. Maybe I could put out a want ad for the hot guy in The Universe! ‘Searching for LOVE.'”

Turley didn’t always get as lucky with his kisses as Snow. Edgington explained, “A girl and her friends had been watching us. Nate didn’t get a lot of kisses that first night, but (this girl) came up for the survey and her friends were like, ‘Go do it, go do it.’ We thought she was going to kiss him. Nate leaned in, and then she gave him a big slap across the face and ran off. It was a hard slap. It was so loud everyone in the Wilkinson Center could hear it. People gave her a lot of hate in the YouTube comments. Some have said a man would never get away with what she did, but really she was pranking the pranker and we were kind of asking for it.”

At the end of our interview Edgington couldn’t resist trying out a new bad breath prank for a video he is filming for his employer Orabrush. Word to the wise — if you see this redheaded mischief maker be careful. He might make you infamous as a YouTube slapper, or, like Snow, lovestruck over a boy in a red sweatshirt.

By the way, if you see this boy, contact The Universe. We have Snow’s number.