Wilkins collapsed Friday morning and remained on life support until Monday night. His cause of death is currently unknown.

“His loss is incredible. His death was totally unexpected and stunning,” fellow BYU law professor Lynn Wardle said. “He was such a talented legal research and writer. It will be hard to fill the hole that his passing creates.”

Wilkins was also an actor who played the role of Ebeneezer Scrooge for more than a generation at the Hale Centre Theatre in West Valley City.

Sally Dietlein, an executive producer at Hale Centre and a close friend to Wilkins, said he had a love and appreciation for Charles Dickens and his message portrayed by “A Christmas Carol.”
“Richard is known world-wide for fighting for family and children,” Dietlen said. “You could tell when he went on stage playing Scrooge that he was always there 100 percent and wanted to stay true to Dickens’ message. He was very playful on stage, almost childlike — it was a beautiful thing to watch.”

Wilkins graduated from the J. Reuben Clark Law School in 1979 and went onto work as the United States Assistant Solicitor General during the 1980s, during which time he wrote many Supreme Court briefs and argued several cases before the high court. 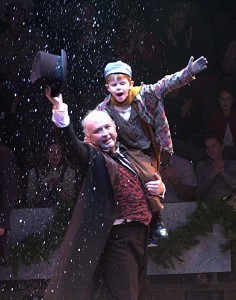 Wilkins was known as a champion of high moral standards and family values and worked extensively to guard the family unit, both nationally and internationally. He drafted legislation limiting abortion that was passed in Utah in the early 1990s, worked with the United Nations to develop policies that would support the family unit across the world and also served as managing director of the Doha International Institute for Family Studies and Development in Qatar for seven years.

“He was very interested in protecting the family unit,” Wardle said. “He was very involved in international organizations and implementing policies that would help support families.”

Because of Wilkins’ staunch defense of the family, he garnered some unpopularity from feminist and gay rights supporters, but according to Wardle, was still highly respected.

“I think most of his students admired him and admired his mind,” Wardle said. “He had a brilliant mind. … There was always a large number of students that wanted to learn from him and hoped to get the rare opportunity to work with him.”

Wilkins’ passion and integrity on and off the stage was apparent to those who knew him at the theater and BYU.

“He was deeply admired by many students and faculty,” Wardle said. “He leaves a great legacy.”