The BYU Kennedy Center’s office of International Study Programs (ISP) has just concluded its annual “Stories Abroad” film contest, and it’s time for students to vote for the best video.

Each year the office of ISP hosts a video contest in which students who participated in study abroad programs can create a two-minute video telling their stories and sharing their experiences of living abroad. This year’s theme is “Life Abroad: Lessons Learned.” [media-credit align=”alignright” width=”300″] 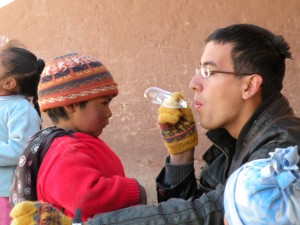 “The purpose is mostly just to get the word out to students to realize the life-changing experiences that can take place on an international program,” said Chelita Pate, the study abroad coordinator for ISP.

Pate said the contest helps increase the understanding of the things students experience on study abroad programs, experiences that students typically can’t get in Provo.

Aaron Rose, the international internships coordinator for ISP, said the contest also allows ISP to market to students whom it can’t typically reach.

“We realized that students are not always on campus, they don’t have to come into this building to talk to somebody, so they’re on social media,” Rose said. “That’s where students are, and that’s where we’re reaching them with this message.”

The message Pate and Rose want to convey to students through the video contest is the value and impact of study abroad programs.

“We realize not everyone is going to go on an international program, but we hope that they can at least enjoy the Stories Abroad and be inspired by them,” Rose said.

Both Pate and Rose agreed study abroad programs not only enrich students with a global perspective and an appreciation for another culture, but they also benefit them in schooling and their careers.

“It will help people have a competitive edge over all the other people waiting for the interview,” Rose said.

He explained that in a global work world, where companies deal with clients of many languages and partners overseas, students should feel even more encouragement to participate in study abroad.

“It says a lot about their commitment to succeed, because not everybody takes that opportunity,” Pate said.

While students who have returned from their study abroad programs are hoping to succeed in this year’s video contest, other students have just embarked on their own international program. Sarah Chamberlain, a sophomore from Saginaw, Mich., is one of those students currently studying in Madrid, Spain.

“It’s very humbling,” Chamberlain said in an email. “The biggest challenge for me is definitely being thrown into a world where nobody speaks English except for the other people in my program.”

Chamberlain said the best part of her experience so far is getting to live in a different culture and seeing how other parts of the world live. She said though she was terrified before she left for Spain, she would definitely recommend study abroad.

“I feel like there are things you learn on a study abroad that you can’t learn anywhere else,” Chamberlain said.

These things Chamberlain mentioned are the exact “lessons learned” the video contest intends to reveal to students who have never considered study abroad. Both Pate and Rose of ISP hope that this year’s contest will get many students on the YouTube channel (BYUstoriesabroad) and interested in doing their own international program.

Voting for the contest started Friday, Sept. 21 and will last for two weeks. The 10 videos with the most views and comments will then be voted on by a panel of judges from the Kennedy Center. First place wins $500.