BYU Broadcasting has been nominated for 19 Emmys by the Rocky Mountain Southwest Chapter of the National Academy of Television Arts and Sciences.

“American Ride,” “The Story Trek,” “La Cocina de la Abuela” and “Sonrisas” are some of the programs BYU Broadcasting has been nominated for.

Each year the Acadamy hosts a gala to honor outstanding achievment in the field of television. The Rocky Mountain Chapter, comprising Arizona, New Mexico, Utah, Wyoming and El Centro, Calif., has shown great favor to BYU this year, and the broadcasting staff is full of excitement and anticipation. 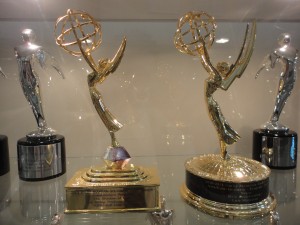 “It’s definitely a great tribute to be nominated,” said Terri Pappas, the coordinating producer for BYU Broadcasting. “Only three other TV stations have been nominated for this many Emmys. We’re pretty excited.”

Pappas said the station submitted just over 20 programs this year, and with such a high nomination rate, the station must be on the right track.

“I think it says that we have programs people want to watch,” Pappas said.

Lily Cano, a student-reporter for “BYU Weekly,” said the Emmy nominations make her proud to be a part of BYU Broadcasting.

“It makes me feel proud to be part of an organization that’s so successful,” Cano said.  “We’re going towards a really great direction, and I feel like BYU Broadcasting has definitely grown a lot in the past couple of years.”

Growth has played a large part in BYU Broadcasting’s success, especially through the spread of BYU-TV International (BYU-TVI) throughout Latin America via cable and satellite.

Saul Leal, BYU-TVI’s station manager and a native Latin himself, was thrilled that his division was a large contributor to the programs nominated this year.

“It is a great honor, especially taking into account that 10 of the 19 Emmys are for BYU-TVI,” Leal said. “So over half of the nominations were for this small station.”

Leal explained that BYU-TVI started five years ago but has only been producing content for three years, and has gained attention quickly because of its excellent content and attention to creative detail.

“We are laser focused on what we do. There’s no margin for error,” Leal said. “We compete with HBO, SciFi, ABC — we are right next to those channels and we ought to be at their level. When you see the largest university station in the world getting nominated and awards from industry-level, recognized entities, you understand that winning an Emmy is a synonym of quality, it’s a synonym of credibility.”

Precision and detail are definitely getting the industry’s attention, but beyond the little golden statues and professional praise, Leal and the others said the best recognition comes from the viewers.

“I think at the end of the day it really is all about our audience, that they feel we’re adding value to their lives,” Leal said.

Thomas Quiroz, the localization and translation manager at BYU-TVI, agreed with Leal saying that he’s proud of the Emmy nominations because of the clean message and values those shows are sending throughout the world.

It is the values and wholesome entertainment shared though BYU Broadcasting that inspires people throughout North and South America to email the stations with their own stories of conversion.

“People can come to see an entertaining show and then they can stay to watch a devotional, and they have a chance to see something related to the Church,” said Luiz Malaman, a producer for BYU Broadcasting.

Malaman added that many people who aren’t members of The Church of Jesus Christ of Latter-day Saints watch BYUtv. He said while he was in Brazil, many people saw his BYUtv shirt and approached him to talk about the shows they love watch on that channel.

“That’s really our purpose,” said Leal. “Everything in between is just salsa on the chips.”

Excitement, gratitude and humility radiate from the BYU Broadcasting Building until the official word for how many of the nominations BYU will actually take home is given at the gala on Oct. 6.

When BYU does get to claim it’s awards, Saul Leal says he is going to do the haka in true BYU-victory fashion.