Tucked away near the tennis courts on the south end of campus is a petite and finely mowed golfing area. It includes a sand trap, hitting cages, a chipping area and a putting green with a few holes.

The area is used primarily for the golf classes offered by the university.

“I think there are certain things that it does well and teaches you how to do, and that’s nice,” said Cameron Montgomery, a senior from Elk Grove, Calif., who is taking his third golf class at BYU. 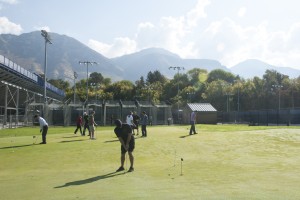 [/media-credit]In addition to the golf area, the class uses the South Field as a driving range. To protect the lawn from losing chunks of grass, the students are told to stand behind the field’s back line.

Students may find it strange to have sacrament meeting in their physical science classroom, but some may find it even more strange to hear of a baptism in the Joseph Smith Building.

There are more than 150 wards that meet directly on campus, and about six times a year, someone within those ward boundaries gets baptized. When they do, they use the baptismal font in room 107.

A small closet off the font includes baptismal clothing. Once the clothing is used, it is shipped off to the north side of campus where it is cleaned by The BYU Laundry.

The BYU Child and Family Studies Lab operates a kindergarten and a preschool in the back section of the Joseph F. Smith Building. The classrooms include crayons, Play-Doh and Elmer’s glue, but that isn’t what sets them apart from others on campus. Each of the three rooms has a two-way mirror disguised as a wall, and on the other side are parents, grandparents and students watching every nose pick and letter learned.

Microphones are hidden around the classrooms and observers can use controls to choose which microphone they want to listen to. A weekly lesson plan is also included in the room.

The office’s secretary, Megan Clegg, says the rooms are used every day, but some days are busier than others.

Students in classes such as Human Development 210 use the room to observe child behavior and write a report.

“Usually the day before an assignment due, we know it,” Clegg said.

The children are not told about the room because when they were told in the past, they would spend their time trying to impress their audience.

A tiny room devoted to Muslim prayer services can be found in a quiet area on the third floor of the Wilkinson Student Center.

The room is open Monday through Thursday for the approximately 40 Muslim students to pray in private. The room has been a part of campus for more than eight years since there is no other alternative nearby.

A larger service conducted by an officiator takes place on Fridays at noon in room 3250 of the WSC. Students are permitted to view the service as long as they are respectful.

The Talmage Building isn’t all numbers and computer codes. Just around the corner of a typical brick hallway is a larger-than-life statue of Po, the animated main character of the movie “Kung Fu Panda.”

Jason Turner is a BYU computer science program graduate who works at DreamWorks and created all the data for Po’s character. The statue is a tribute to his success, as well as the University’s program and alumni.

Movie posters for “Toy Story 3” and “Cars 2”, signed by BYU graduates who did designs for the films, can also be found in the building’s hallways.