After months of anticipation, the iPhone 5 was finally released Friday morning.

Customers flooded both Apple and other cellular retail stores; some even waited outside the stores overnight.

“We had people camped out,” said a local Verizon store manager. “We sold out in about an hour, all the stores had people lined up. We also saw quite a few 4Ss go out because the price dropped. There were definitely a lot of younger, college-aged customers.”

BYU students were among those customers. Andrew Wilson, a junior studying pre-communications, waited early Friday morning at the Apple store in the Gateway Mall. 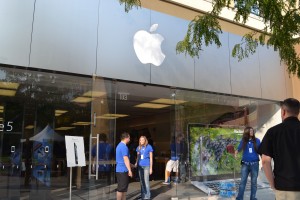 [/media-credit]”I have a couple of friends that work at the Apple store, so they convinced me to do it,”  Wilson said. “I thought I’d be crazy to ever do that, but it was actually kind of fun. Plus, I got a bunch of awesome swag from other companies; even some awesome headphones, and Apple catered hot chocolate, coffee and doughnuts for the people waiting for the store to open.”

To Wilson, the wait was worth it.

“It feels great in my hand, the larger screen doesn’t make it feel too big for my hand or pocket,” he said. “I was surprised and impressed with how solid it feels yet how light it is. I think it’s a beautiful phone overall.”

Apple began pre-orders on Sept. 14 and completely sold out within an hour. Jeff Hammond, a senior studying geospatial intelligence, was one of those few people who was able to order the phone.

“I have been using an older phone and decided it was time to upgrade to a smart phone, and the coming out of the new iPhone was the perfect timing to do it,” Hammond said. “I am excited to be able to schedule my days on it and use Siri.”

Tyler Richards, a senior studying business management, bought the iPhone 5 because of its new upgrades. One of the biggest changes with the new iPhone is the upgrade to a 4G LTE network.

“I love that it has that extra space compared to the 4 or the 4S,” said Richards. “Also, Siri is new to me. The 4G is new to me, and I really need that speed. I have a startup company, and I constantly need to be connected to the web. Especially on my iPhone. That surfing speed is huge to me.”