In Saturday’s game against Utah, the BYU football team found the noise and excitement created by opposing fans could be quite a game-changer.

The chaos was evident from BYU’s offensive line, who were flagged for a number of false starts and sent a wild snap over the head of quarterback Riley Nelson when he wasn’t looking. BYU overestimated the power of the fans, but this week they hope to channel the noise and put it into more productive game plays. 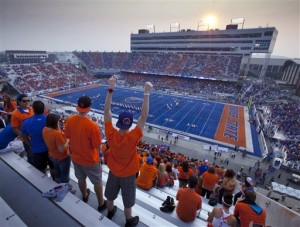 [/media-credit]In a quick turnaround, the team will play Boise State on Thursday night and all eyes will be on the two teams as they battle it out on the blue field. BYU heads to a game full of odds, many not in their favor, but one thing is for sure: the Boise State fans will make sure the odds turn out in their favor.

A group of unique Bronco fans sits in the South end zone every home game, making their presence well felt. They often dress up in orange and blue garb, and many come year after year with season tickets in hand. Bronco Stadium holds 37, 000 people which pales in comparison to LaVell Edward’s Stadium which holds 63, 470 fans, but that 37,000 sounds much louder than you’d think.

Nelson, who transferred to BYU after playing at Utah State, is no stranger to playing at Bronco Stadium. As a freshman, he faced the fans and the blue turf. And after what happened on Saturday night, Nelson knows the team can’t take Boise’s crowd lightly.

While Bronco Stadium will no doubt be full of Boise State fans, BYU attracts the crowds wherever they go, especially in Boise. So count on the stadium to house a few Cougar fans, even if they can’t block out all the sound from the home crowd.