Firefly, a band of sisters as spunky and sweet as the name implies, is in the process of recording a new EP in Alpine.

The family of fiery redheaded girls combines the deep strings of the cello and the rhythms of acoustic guitar, embellished by  decorative mandolin, piano and other soft instruments, with the harmonies of soprano, mezzo-soprano and alto voices to create the rich and lively sounds of country music unlike any heard before.

Playing the role of both mother and manager of the girls, Gaylene Merchant provided the following information about Firefly’s future:

“The girls are working with Nashville seasoned producer Stoker White, at Soularium Studios in Alpine, Utah,” Merchant said in an email. “They will release an EP called ‘Firecracker Red’ this fall. The song ‘Firecracker Red’ was co-written with Firefly and Taylor Swift’s Grammy Award winning engineer Chad Carlson. The other songs are originals also co-written by Firefly and top Nashville songwriters. Several talented musicians will be featured on the album.” 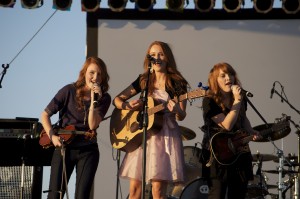 The girls said they have been on a crazy ride. Firefly just had its four-year anniversary this summer, and in those four years the girls have been to many different places and have met a variety of different people.

Melanie, McKenzie and Maddie, the redheaded sisters in Firefly, said it took a while to find and develop the exact sound they were looking for. They don’t want what they stand for and represent to be lost in recordings.

“We realize the power music has,” Maddie said. “We want to share a good message that is meaningful. We want to make people feel good and to be happy.”

The girls have a lot of connections with labels but are still figuring out the ropes. Hoping to be the brightest sound in country music, this is a dream come true for the girls.  Working with White has put them more into recordings than they have ever previously been.

“We want stay in control of our standards and image,” Melanie said. “We want to be true to who we are, and we’ve decided on what’s never going to change.”

The girls have all had to make sacrifices to bring Firefly to where it is now. Doing so has taught them valuable lessons about prioritizing.

Melanie graduated from BYU in elementary education, McKenzie is studying visual arts, and Maddie is a senior in high school, planning to attend BYU next year. Education is very important to the girls, and they believe sacrifice brings the balance so they can do it all.

“Finishing school is really important to us,” McKenzie said. “You never know what the future will bring. Right now we want to focus on our music, but we feel everyone who has the opportunity for education should go after it, even at the cost of sacrifice.”

The girls are excited about what lies ahead of them. With a new EP in the works, a music video to accompany their first single and the possibility of a tour in the future, the girls are counting their blessings.

“Heavenly Father has given us a gift,” Melanie said. “Music brings so many opportunities to serve, and there’s so much good you can do with it. When we play it’s not about us, it’s about what we can do for others.”

As they soak in this experience of a lifetime, the girls stick true to what they believe is most important. They rely on the support system of their family and are always looking for ways to keep them involved.

“Loving the journey makes all the difference,” Maddie said. “When we look out and see that we’ve touched someone or see that we’ve made a difference, we know we’re doing something right. Those moments are what keep us going in spite of the difficulties that arise.”