The show will take place Friday, Sept. 7, atop the Central Bank parking terrace, located at the corner of 100 N. 100 W., and will feature some of Provo’s premier performers. This month’s line-up boasts the return of  hometown heroes Fictionist along with up-and-comer The New Electric Sound.

Jacob Jones, keys player for Fictionist, said the band is stoked to be back  in Provo playing for their hometown crowd.

“Especially to play at the beginning of the school year. It’s going to be kind of a beginning bash/party,” Jones said.

The band has been working with renowned record producer Ron Aniello, who has collaborated with the likes of Bruce Springstein and Lifehouse, and they are excited about the results. 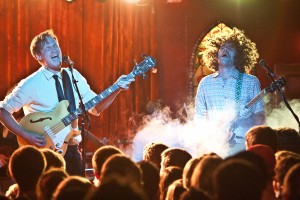 “We’re excited to come back and excited to play new songs from our upcoming album,” Jones said, adding that they were looking forward to playing the Rooftop Concert again because of all the success the show has had.

“They’re just getting off their Northwest tour. They’re warmed up and at peak performance,” Kendrick said, stating that she’s also excited about the opening act, The New Electric Sound, and their 60’s surfer rock group vibe.

Rooftop shows are all about the ambiance.

“You could feel the parking garage shaking,” Craig said.

This September’s show is expected to have over 4,000 people. That’s about 1,500 more people than summer shows that took place earlier this year.

With free giveaways, shops all along downtown Provo  and access to great restaurants, the Rooftop Series is the perfect closer to summer—and the party won’t stop when the music does.

Darcie Roy, co-owner of Muse Music Cafe, said fans will have the chance to hang out with the musicians as the restaurant hosts an after-party to celebrate the debut of the new and improved Muse menu.

“We’ll all be unwinding, mingling, listening to music, dancing, and of course, eating, as this after-party also is the official re-launch of our café menu,” Roy said.

For more information about the concert, visit rooftopconcertseries.com.