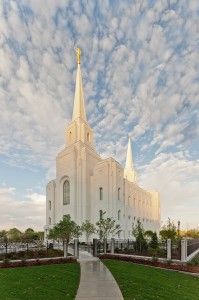 The Brigham City Utah Temple opened its doors to the public two Saturdays ago, bringing The Church of Jesus Christ of Latter-day Saints’ total temple count to 139, and Utah’s count to 14.

Except for Sundays and Saturday, Sept. 8, a four-week-long open house allows the public to reserve and then tour the newest temple until President Boyd K. Packer, president of the Quorum of the Twelve Apostles, dedicates the building on Sept. 23. This dedication will take place during three different sessions, 9 a.m., 12 p.m. and 3 p.m., broadcast to the entire LDS audience in Utah, as well as parts of southeastern Idaho that are within the temple’s district.

“The primary artists that I worked with were Linda Christensen and Mike Malm, and I assisted them and did the research for the Native American painting in the baptistery,” Betenson said. “I was able to paint on it, which I’m so grateful for because I learned how to paint temple murals, which was wonderful.”

Because of the importance of such an occasion, all church meetings in the aforementioned areas on Sept. 23 will be canceled so Church members may participate in the broadcasts.

The creation of the Brigham City Utah Temple was announced in October 2009 by the Church’s First Presidency, and ground was broken 10 months later by President Packer, who hails from Brigham City himself. The temple will serve around 40,000 LDS members in 13 stakes.

Chase Henrie, a 24-year-old UVU student from Centerville, sees the new temple as an increase in Church members.

“It’s exciting to know there are more temples because that means there are more people going,” Henrie said. “That means people are taking advantage of the blessings of the temple.”

Contrary to LDS meetinghouses and churches, temples, known as “houses of the Lord,” offer members chances to become closer to Jesus Christ and make covenants to follow His word and serve their fellow man.

“The more temples, the better,” Henrie said. “It’s nice to have a lot of temples close by because when one’s under construction you have other options to go to so you don’t mess up your routine.”

The temple itself is 36,000 sq. feet, and built on 3.1 acres. From it’s base to the very top of the 12-foot-tall Angel Moroni statue, the building is 165 feet tall. Such exterior features include stone from Weber Canyon for the walls, twenty-six fruit trees surrounding the temple and round windows on the second floor made with art-glass peach blossoms. The inside of the temple features hand-carved rock maple wood, stone floor imported from Turkey and several pieces of original art work.

“I was just sending an email of to Linda and Mike last night and I was like, ‘Oh, I wish you could see the people just coming and going and just the excitement the whole town is feeling to have it here,'” Betenson said. “You can feel it in the air. Long after the buses leave we’ll get to enjoy being able to go in, … I look forward to just getting up in the morning and just going. My own feeling is that temples strengthen Heavenly Father’s army.”