Last week, a judge sentenced Dharun Ravi to 30 days in jail in the Rutger’s webcam trial.

I wonder if Ravi consciously recognized how cruel his actions were or if he thought it was just an Internet prank. I doubt he would have punched or physically harassed his roommate, but somehow actions just as vicious were permissible as long as they remained in the “virtual” realm.

It’s no secret human beings can be incredibly cruel, but sometimes it seems the Internet makes it that much easier. Visit any website and one look at the comments section confirms as much.

In 2010, a studyconducted by researchers at the University of Michigan claimed college students are 40 percent less empathetic than their counterparts 30 years ago, with the most significant decline occurring after 2000.

Last year, Stanford University psychiatrist Dr. Elias Aboujaoude hypothesized a cause of growing incivility could be the result of our online avatars eclipsing our reality-based selves.

Aboujaoude warned, “We should ask ourselves if one reason we’ve become so uncivil is because of what we do online and how we act on our blogs and in our chat rooms.”

Modern technology encompasses our everyday lives. What we do and read in our virtual worlds impacts our physical world.

May I suggest three shortfalls to be wary of on the Internet.

Almost 20 years ago, the New Yorker published the iconic “On the Internet, no one knows you’re a dog” cartoon. On many websites and forums, users can comment, complain and rant without fear of it affecting their “real” life. Instead, they can hide behind the anonymity of a random username.

This is why some newspaper websites, including The Universe, require commenters to log in using Facebook or another account associated with a real identity. Think about it, would you really say some of the comments you make if your real name was attached. If you wouldn’t want your boss or mother reading it — don’t type it.

While anonymity contributes to cruelty in the online world, I believe a bigger issue is the virtual nature of other users.

The stripped down nature of communication using only typed words, rather than the infection and body language present in face-to-face communication, creates a breeding ground for miscommunication and extreme views. On the Internet, it’s easy to forget the person you’re responding to is a human being. Kate235 becomes just a name, not an individual with a full range of emotions.

Remember, virtual quips hurt just as much as those done in person.

About a year ago, a professor gave advice for navigating an increasingly virtual world — sit on your responses. Before sending the email you just finished or the witty comment you crafted, wait five minutes.

Our fast-paced world makes it easy to tweet before thinking. By the time the neurons kick in, the message is sent, forever floating in cyber space.

At The Universe, every semester former letter writers contact us asking for letters to be removed. Sometimes letters were exaggerated in hopes of being published. Other times, knee jerk complaints were sent before the author had time to realize he may not want his name attached.

Elder David A. Bednar, of the Quorum of the Twelve, cautioned, “I raise an apostolic voice of warning about the potentially stifling, suffocating, suppressing, and constraining impact of some kinds of cyberspace interactions and experiences upon our souls.”

Technology has vastly improved our lives, but perhaps we sometimes use technology without questioning how it’s affecting us.

Yes, it’s nice to know we can complain directly to the source, even if it’s just a tweet. But should we? Are we truly attempting to dicuss and engage in conversation or are we just blindingly shouting without being willing to listen in return.

Katie Harmer is the opinion editor for The Universe. This viewpoint represents her opinions and not necessarily those of BYU, its administration or The Church of Jesus Christ of Latter-day Saints 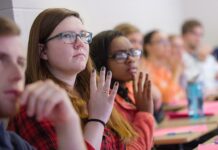