Welcome to the Wasatch

A look into the world of trail running by Coby Hoch December 21, 2017

Amy Tice was ashen-colored and barely moving when John Grobben got to her. Some of those present moved her so that her head was downhill.

She’d only been turned around for maybe a minute or two and all of the sudden she just reared back and let out this big sigh and was in total cardiac arrest. John Grobben 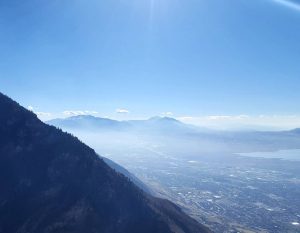 The Wasatch rise from the valley floor. (Coby Hoch)

She’d been racing in the Wasatch Front 100 Mile Endurance Run. Grobben said that it wasn’t until about 90 minutes later that her heart beat on it’s own again despite the efforts of race officials and emergency responders.

Trail runners sweat and bleed. They get blisters, lose toenails, break legs and constantly battle challenges like dehydration and chaffing. The cold wind buffets them and some even start hallucinating after running for hours, but there is a certain sense of accomplishment that draws them to the sport. Nineteen trail races are scheduled for 2018 and over 5,000 people have joined the Wasatch Mountain Wranglers Facebook group. Enough people pursue trail running all over the world that manufacturers are developing trail running specific gear.

Utah’s Wasatch Range rises thousands of feet straight from the valley floor, calling to the runners down below.

Below you’ll find a 360 degree experience that transports you into the Rock Canyon area. For a wide angle view click here. Enjoy.

The following is a map of the experience above.

I want [the climb] to be intuitive. I want it to be hard, but I also want to get straight to the peak as fast as we can. Julian Carr 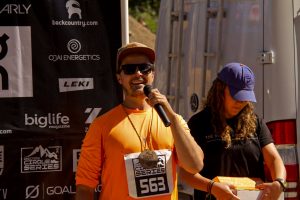 Not all trail races are as long as the Wasatch 100. Julian Carr, a pro skier who front flips cliffs as tall as 210 feet, started summiting Utah’s Mount Olympus with his dog Lexie in the off-season for training and it inspired him to create the Discrete Cirque Series, five races, all under 10 miles that push runners to their limits. Each race makes a loop forcing runners to climb between 2,000 and 4,000 feet and then dropping them off the face of the world as they make their way down. Carr said, “I want [the climb] to be intuitive. I want it to be hard, but I also want to get straight to the peak as fast as we can.”

Balancing Recreation and Preservation on the Provo River

by Sebastian Meyer December 14, 2017
Next: Education

Battling for the arts in education

The arts in education have seen plenty of challenges, and new issues keep coming. It’s a complicated and troubling topic that evokes strong feelings in many. by Rebecca Sumsion April 25, 2018