Danielle Davis’s journey is not uncommon. After graduating from high school, she started college and took out a few student loans. She got a job at a restaurant working 25 hours per week to help pay for extra expenses. And now, after only three years of school, she has accrued over $15,000 in debt — a looming amount of money that needs to be paid off within the next 15 years. But as Davis finishes her last year at Utah Valley University, she and many other recent graduates are finding out it’s not that easy. 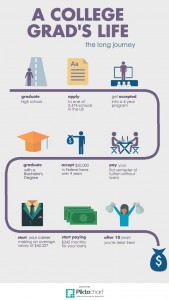 Davis, like a lot of college students, is starting to feel the stress of loans taken out during undergraduate education. The average 2015 graduate with student loan debt will pay back some $35,000, according to an analysis of government data by Edvisors. Four out of five graduates leave their university without a full-time job to pay back their loans.

Many of these grads are having to take jobs for which they are underpaid and overqualified just so they can make their monthly payments.

And the amount of money they owe the government is not only causing them stress, but impacting every part of their lives from relationships and marriage to their credit score and retirement.

In 2014, nearly 70 percent of graduates left college with student loans according to the National Center for Education Statistics. That growing number mirrors the constant rise in yearly tuition at most colleges and universities. The average cost of tuition and fees for 2015–2016 was $32,405 at private colleges; $9,410 for state residents at public colleges; and $23,893 for out-of-state residents attending public universities, according to the College Board. Tuition for a full-time LDS student at BYU is $2,575 per semester and $5,150 per semester for a non-LDS student. Four years (or eight semesters) of tuition at BYU is just over $20,000.

“Our big concern is that students are borrowing money out of context,” said Paul Conrad, a financial advisor at BYU. “Maybe they aren’t very concerned that they have borrowed a lot of money and they don’t have a plan.”

Our big concern is that students are borrowing money out of context. Paul Conrad

A failure to plan has led to many students defaulting on their loans. Approximately 615,000 students who couldn’t afford to make payments on the money they borrowed during their college years defaulted on their loans at the end of the 2013 fiscal year.

“I feel like it’s absolutely going to affect my future,” said Hannah Belnap, a family, home and social science major at BYU.

She’s one of the lucky ones: Having a father who teaches at BYU means she receives half-tuition, start to finish.

Her fiancé, though, is not so lucky. And marrying someone who owes money to the government is something Belnap said is going to be an added stress on their new marriage. She worries her fiancé’s student loans might delay their plans for starting a family, something Belnap has looked forward too since she was young.

“All I’ve ever wanted to do is be a wife and a mother,” she said. “And the idea that that could delay the process is kind of frustrating.”

Belnap’s fiancé, Evan Clinger, said it’s nothing he has really worried about until now.

“Filling out my FAFSA every semester is just something I got in the habit of doing,” Clinger said. “I make payments every month, and I have a job to pay some of it off, but after I take out more loans for graduate school I’m going to be owing money for a long time.”

“I think a lot of students who come for counseling, that loans are one of the big stressors that they have,” Barbara Morrell, a counselor at BYU said. “It’s on top of the stress of performing well in school and having relationships, either with dating or spending time with their spouse or children.”

Morrell said many of the students who come to see her at BYU’s stress management office have large amounts of debt hanging over their heads. These students also have jobs, social lives and school to worry about. Morrell says a lot of them feel like these loans are putting their lives on hold. Some are conflicted about accepting less-than-ideal jobs just to pay the bills.

“I do think as millennials, there’s a weird paradigm of ‘we’ll take any job,’ but we also want the best job we can get at the same time,” Kaitlyn Spell, a senior at UVU, said.

Like a lot of college students, Spell manages a job, a full course load and a part-time unpaid internship.

“I actually just told my best friend last night, ‘I’m sick and tired of being sick and tired, but I can’t stop because there’s too much to do,’” said Spell.

As many graduates are finding out, borrowing money for school has unintended consequences further down the road.

“Students need to start looking at what impact that has on accomplishing other goals,” warned Conrad, one of the financial advisors at BYU. “Nationally we hear about students putting off marriage. Something I think about is even the big goal of retirement. You have to get those seeds in the ground early and if it takes a long time to pay off loans, you may start that process too late.”

These serious issues have caused students across the country to protest student loans. But even after all of this, after borrowing thousands of dollars for school, students say in the end it’s all worth it. As Spell and many other students put it, there’s no hope for a better life without school.

The Rise of Faith-Based Films

Bringing Back the Buzz in Charlotte