In July 2014, 25-year-old Cessiley Haderlie was diagnosed with Hodgkins Lymphoma, a form of cancer. As a young, healthy woman, she never anticipated she’d have to deal with something like that—at least not at her age.

Before her 26th birthday, Haderlie began six cycles (12 total treatments) of chemotherapy. She was forced to spend the most grueling months of her treatment away from her husband in Idaho, while her doctors treated her in California.

“On my birthday, my husband created an event on Facebook and invited people to support me and my Hodgkin’s awareness by either wearing leopard print (my favorite color) or violet (the color for Hodgkin’ 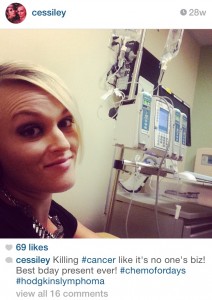 s),” she said.“It was really amazing because people I didn’t even know were sharing photos of them wearing the colors. It was a great birthday present to have so much support.”

Haderlie started a blog to journal her experience and keep her family updated. She connected with other women with Hodgkin’s Lymphoma on Instagram using #HodgkinsLymphoma.

“I quickly made connections with several young women by commenting on each other’s photos and sharing advice,” she said.

Haderlie’s experience with finding other people on social media is not unique, but it is a new trend. Twenty years ago, most cancer patients couldn’t find or connect with patients with their same diagnosis. Today, adding a hashtag like #HodgkinsLymphoma to a photo can bring individuals together that would never have met otherwise.

''I quickly made connections with several young women by commenting on each other’s photos and sharing advice.'' —Cessiley Haderlie

With cancer and other long-term illnesses reaching an increasingly younger generation, social media is playing a larger role in how patients cope with their diagnoses. From their hospital bed, they can make meaningful connections with other patients and inspire others with their stories on social media.

In January 2014, the Pew Research Center reported that 74 percent of online adults use social media sites. When a life-changing event such as a cancer diagnosis hits an individual, they are likely to share their experience on social media.

As the leading cause of death around the world, cancer strikes individuals and families daily. Each year, 14 million people discover that they have cancer, and 8 million of them die, according to the Centers for Disease Prevention and Control (CDC).

The commonality of cancer varies by age and by gender, but the American Cancer Society has reported that breast, colon/rectum, and lung/bronchus cancers are the most deadly.

Some cancer patients use Blogger, some use Facebook, some use Instagram, and some use Twitter. Regardless of what platform they use, most of these patients claim that sharing their story digitally has a major impact on their wellbeing.

This was the case for 20-year-old Rachel Stratton. At the age of 17, she was diagnosed with an extremely rare and deadly form of brain stem cancer (diffuse intrinsic pontine glioma or DIPG). After her diagnosis, her doctors tried four different types of chemotherapy on her—all of which didn’t work.

“In the middle of this, the cancer’s spreading to my back and it’s getting bigger, and all these different things are happening,” she said. “But I started a blog at the very beginning so that I didn’t have to explain it over and over and over to everybody, because it was really hard to even admit it to myself, let alone to others,” she said.

Rachel’s story spread all over the Internet and she started gaining new followers every day. Listen to Rachel’s story below, or check out her blog here.

Connecting with Other Patients

Because Rachel’s cancer was so rare and deadly, she didn’t have many people to connect with. Other cancer patients, however, rely heavily on social media to connect with other people going through the same trial. 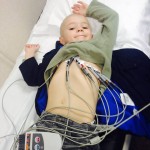 Steele Roetto, age four, was diagnosed with a rare form of leukemia (APL or acute promyelocytic leukemia) in November 2014. As with any severe childhood illness, his family struggled to accept his diagnosis. Their doctors told them that this form of leukemia has a high success rate (90 percent), but that it hardly ever appears in kids younger than eight. So one of the first things his mother, 37-year-old Lara Roetto, did after his diagnosis was look for other kids his age who had struggled with APL leukemia.

Roetto found Super Luke, a little boy fighting the same form of leukemia—who was one year ahead in his treatment. Finding him inspired Roetto to document her son’s treatment so that future patients could find comfort in his story too. She named her page “The Little Man of Steele.”

Roetto discovered that social media was connecting her with people of all different faiths, from all over the country, with one uniting factor: their fight against cancer. She felt it was an opportunity to also share some of her LDS beliefs.

Lara Roetto explains why she chose to share her son's story on social media.

The Cancer Wellness House, a Utah-based non-profit, seeks to help cancer patients not feel alone. They turn to social media to connect patients with their organization and with each other. The have seen how the anonymity of social media has allowed many patients to open up to conversations they may not have had otherwise.

''For a lot of people, being able to read something and make a comment is a lot safer than walking into a room and having a conversation about it.'' —Kendra Baum

“For a lot of people, being able to read something and make a comment is a lot safer than walking into a room and having a conversation about it,” Executive Director Kendra Baum said.

The Cancer Wellness House often posts sensitive and controversial articles on their Facebook page. These are usually their most popular posts.

“That is so cool to me,” Baum said. “It means that people will read about those tough topics online, even if they’re not willing to talk about it face to face.”

Social media isn’t always helpful to a cancer diagnosis. Ginger Johnson is the founder of Happy Chemo, a Utah-based organization that connects cancer patients with proper treatment and resources for their individual situations. She has seen both sides of how the internet effects cancer patients.

“As with anything, you can use social media for good or bad,” she said. “We encourage people to use it for hope, love, and encouragement, but not everybody uses it that way.”

Johnson has also observed how the Internet has changed how people deal with cancer.

“Twenty years ago, you couldn’t do your own research, so you were left at the mercy of your doctors. Today people can research their individual needs, but that also means that they can self-diagnose. Which often adds to their stress,” she said.

But for patients like Cessiley Haderlie, Rachel Stratton, and Steele Roetto, social media played a large role in effectively sharing their stories and connecting them with other people. It didn’t cure their cancer, but it did provide them with emotional and mental comfort to offset their dismal diagnoses.

Social media is providing cancer patients with the ability to share their stories with the world and connect them with a diversity of people. In an age of unfolding technology, the future could hold powerful physical treatments, as well as new social media tools for cancer patients.

See a short evolution of social media in the timeline below.

Self-publishing: an alternative for independent authors