A Utah family searches for hope and justice in the 23-year-old unsolved murder of Rosie Tapia by McKayla Robinson December 31, 2018

Lewine Tapia stood in front of television cameras and reporters for what felt like the hundredth time. The sun glared down on her with unrelenting heat, and the inquiries all seemed the same. But still, the questions remain:

Who is the individual known by the family and investigators as the “Good Samaritan?”

When will her daughter find justice?

For 23 years, Tapia has been searching for these answers and for 23 years she has gotten nothing but dead-end leads and mostly frustration from working with the police, according to the family.

But now, she hopes to find some answers to those questions through a renewed relationship with the Salt Lake City Police Department, better DNA technology, interest from a national television network and help from a local group of investigators.

In the early morning hours of August 13, 1995, Lewine and Robert Tapia returned to their West Valley home at the Hartland Apartments on 1700 South after a Saturday night out dancing. Lewine’s daughter Emilia Elizondo, 18, was babysitting her younger half-siblings. Lewine checked on the kids, gave them each a kiss and went to bed.

When she woke up early that Sunday morning and walked into her daughter’s basement bedroom, she found the curtains drawn, the blinds lying on the floor, the screen removed and the window wide open. Six-year-old Rosie was gone.

A few hours later, Rosie’s body was found in the surplus canal connected to the Jordan River a few blocks northwest of their home. More than 24 hours later, the family learned Rosie had been sexually assaulted and brutally injured.

The evening before the girl’s disappearance, Emilia walked 6-year-old Rosie to the apartment complex’s play area and left her to swing and slide before bedtime. But just minutes after returning to the apartment, Emilia looked out the family room window and saw a man approaching, carrying Rosie. She met him at the apartment door.

“She was on the slide and got kicked in the back by another kid,” the man said.

Emilia told him she would check Rosie and took her from the man.

“Bye, Rosie,” the man said as Emilia closed the door.

“How did he know your name?” Emilia asked.

“I don’t know,” replied Rosie, telling her half-sister that she hadn’t been hurt on the playground.

To this day, the mysterious man has come to be known as “The Good Samaritan.” 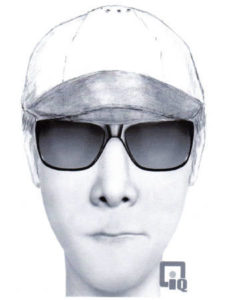 Composite sketch of “The Good Samaritan.”

“On one hand, in 2007, Detective [Mickey] Pahl reported that he interviewed the man who brought Rosie home and cleared him as a Good Samaritan, but then in 2010 — 15 years after the crime — the police obtained a composite drawing of the man who brought Rosie home. The description was provided by the babysitter, Rosie’s older sister,” Jensen explained.

Immediately following the discovery of Rosie’s body in 1995, the police followed up with a man they thought might be “The Good Samaritan.” The man often hung out around Hartland’s swing set area playing his guitar for the kids, drawing suspicion from neighbors and the Tapia family in particular.

However, investigators learned that the “guitar man” had a young son and would often take him to the park.

To further corroborate the fact that it wasn’t the “guitar man” who brought Rosie home, the police found he was a biker who had been out of town on a bike trip and returned too late that evening to be the person who brought Rosie back from the play area.

“It is just as plausible of a theory that the person who brought her home did so to learn where she lived in order to know where to come back for her later that night.” Jason Jensen, Private Investigator

But, according to Jensen, investigators at the time concluded that he did bring Rosie home that night and had lied about it when he met with them. They decided it was meant to be a good deed on his part, thus, deeming him a “Good Samaritan,” and closing the book on this possible person of interest.

“If the guy who brought Rosie Tapia home was a Good Samaritan, why would you publish a drawing of the guy asking for someone to identify him?” Jensen asked.

While Jensen thinks this individual is the key to this case, no one has been clearly identified as “The Good Samaritan.”

But a new lead may be developing through media coverage of the press conference, where Jensen, with Lewine Tapia standing nearby, made the latest plea to Salt Lake City residents.

While this latest lead is still being investigated, Jensen believes it only makes sense that “The Good Samaritan” would be the killer.

“It is just as plausible of a theory that the person who brought her home did so to learn where she lived in order to know where to come back for her later that night,” Jensen said.

The Salt Lake Tribune about 24 hours after Rosie’s death — before it became a murder investigation.

For the first 24 hours after Rosie disappeared, the police explored the idea that she had wandered off on her own.

“I think that’s something the police tried to tell us so that we wouldn’t try to dig further into what happened to her, so we wouldn’t call for a bigger investigation,” said Esmerelda Elizondo, another older half-sister to Rosie.

James Lopez, Rosie’s uncle who helped in the search that morning, agrees: “There was no urgency when we asked if we could put the flyers out… We didn’t feel like there was any urgency like there is now.”

Current SLPD investigator, Detective James Spangenberg, said that wandering off was just one option police explored at the time, along with the idea of kidnapping.

“I think everything was considered at that point, and then once her body was found hours later, then that obviously changed everything,” Spangenberg said.

As Spangenberg stated, evidence found later changed the thinking of officers working the case and confirmed suspicions of kidnapping.

During the hours after Rosie’s disappearance, police and detectives combed through the apartment and the neighborhood looking for clues. Family members gathered to hand out flyers and search for Rosie.

That first morning Emilia was riding in a police car on her way to the station to give a statement when a voice came over the radio saying that a small female body had been found in the canal.

At that point, Emilia said she “already knew” it was Rosie.

Rosie’s body was found floating face down in the middle of the canal, only half of her body visible — the other half submerged. Police described the body like a doll in the water.

However, according to Jensen and family members, the police still maintained that Rosie had probably just wandered off and had accidentally drowned in the canal.

After examining Rosie’s body, evidence showed signs of drowning, blunt force trauma and sexual assault. That evidence made it impossible to claim Rosie had merely wandered off.

“The medical examiner released findings that she was sexually assaulted,” Jensen said.

According to Jensen, while the sexual injuries were brutal, they were not obvious when glancing at the body. That may be why police did not consider the possibility of kidnapping seriously enough during the first 48 hours, which are so crucial to solving a murder case.

It is believed police recovered a small amount of DNA evidence from under Rosie’s fingernails. Unfortunately, in 1995 when the murder occurred, DNA technology was not what it is today. And while the small amount of DNA found on Rosie’s body can still be tested today, forensic labs would expect to see signs of degradation after all this time.

However, not all hope is lost.

Over the last couple of years, the Tapia family has experienced a renewed and improved relationship with the Salt Lake City Police Department. They now meet every few months to discuss the details of the case and any new leads that have come up as police continue to investigate Rosie’s case.

“Leads are coming in all the time and all those leads are being followed up on, forensic evidence is still being analyzed, people are being interviewed. I mean, the case is being actively worked,” Spangenberg said.

Last fall, through a plea from a family member, Investigation Discovery Network (owned by The Discovery Channel) heard about Rosie’s story and wanted to know more. After communicating with the Tapias, the network decided to feature the case on an episode of “On the Case with Paula Zahn,” which is set to air March 3. 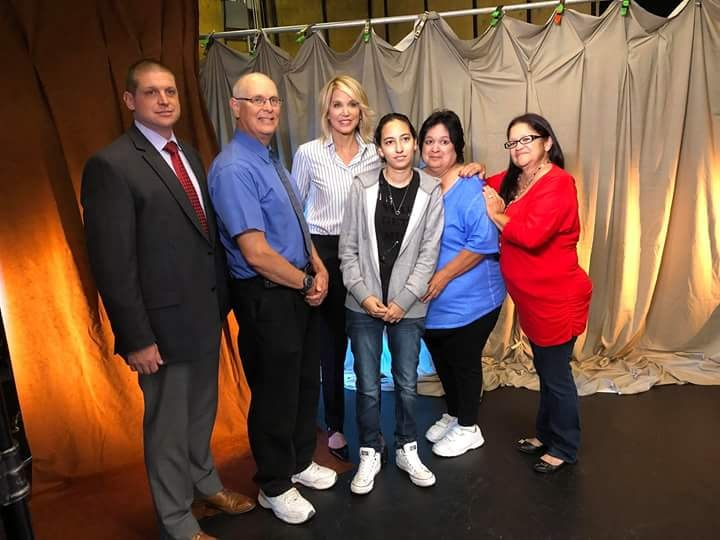 Detectives Spangenberg and Parks (left), Lewine Tapia and family members meet with Paula Zahn (center) in New York City while taping interviews that will be featured on “On the Case with Paula Zahn.” (Courtesy Tapia family.)

So, on a chilly morning in October 2018, Detective Cordon Parks walked along the bank of the canal and pointed out to producer Judy Artime and crew members where Rosie’s body was found.

Rosie’s mom, Lewine, said “On the Case with Paula Zahn” is having a DNA expert take a new look at the evidence as well.

The show will feature interviews with family members, investigators and others involved in Rosie’s case.

This national attention could play a role in the quest to solve Rosie’s case.

Additionally, the Tapia family is receiving support from local organizations such as the Utah Cold Case Coalition. The group meets often to discuss the details of this case and other cold cases in Utah. They also offer rewards for information, a tip line and resources to aid in solving forgotten cases.

Private Investigator Jensen also offered to take on the case pro bono, providing much support and renewed enthusiasm in investigating the details of the case.

Though that last chapter is still unwritten, there may be several twists and turns in Rosie’s story before that happens. As Lewine stood in the same hot summer sun answering reporters’ questions, a new chapter was unfolding. State legislators created Rosie’s Law, requiring a state-wide database containing information on unsolved missing persons and homicide cases that are more than three years old.

Though it may not resolve Rosie’s case immediately, it provides hope for her family and so many others whose cases have gone cold.

For more information about the Rosie Tapia case and to watch 1995 television coverage visit whokilledrosie.com

The mind of the musician

An Inside Look into the Lives of Local Bands by Michael Morris December 31, 2018
Next: Feature

Censorship, soft power and Chinese-language newspapers in the U.S.