Female entrepreneurs: on the rise in Utah Valley

On  November 18, 2014, Jeni Awerkamp launched her own business. After only 36 hours on Kickstarter, Awerkamp and her business partner, Marilee Killpack, had the $35,000 funding they needed to start manufacturing their product.

Four days later on November 22nd, Awerkamp had a baby.

In today’s world, less than a week is all a woman needs to start a business and give birth. If there’s ever been proof that the role of women in business is changing, Awerkamp is it.

On an average day in 2014, 1,288 women opened their own business. An all-time high and three times as many as in 2007, women are forcibly breaking through pre-existing barriers. The entrepreneurial world is becoming more accessible and women are finding their place in it. There are still some problematic “ceilings.” Women get less than 5% of venture capitalist funding and women-owned businesses only account for 4% of national revenue. It’s tough, but with new funding options, the power of the Internet and a changing societal outlook, women are making their own space in business.

The Internet offers an accessible, convenient way to conduct business across various industries.

A national and local trend
According to a 2013 national census, women make up only 28.8 percent of business owners. In fact, according to a New York Times study, fewer large companies are run by women than men named John.

From 1997 to 2013, the growth of women-owned business have surged, opening 1.5 as many businesses as men. This is reason to celebrate for female entrepreneurs in the United States.

It’s a local trend, too. The Women in Business club at BYU has grown from 8 members in 2008 to 280 in 2015. At a college level, girls are more interested in pursuing business as a course of study.

“Even since I started the [Information Systems] program a few years ago, there seem to be more girls in the halls of the Tanner building,” said Breanna Bowden, president of the Women in Business club on campus.

Female entrepreneurs are starting at their entrepreneurial pursuits younger, empowered by the encouragement in popular culture.

Kylie Chen, a senior in the BYU business strategy program, has yet to graduate and is already a business owner. She’s the founder of Acanela, a social enterprise start-up aimed at connecting cultures through healthy eating.

For Chen, it was a semester abroad that sparked a potential business idea. Within a semester of returning home, Chen wrote out a business model, developed a marketing strategy and looked to outsource for manufacturing. She started her website, networked within the Marriott school and by the end of the semester was pitching to venture capitalists on the top floor of a highrise in downtown Salt Lake.

Brittany Parker discussion her experience as a young entrepreneur in Utah Valley.

“I don’t think we’re ever ready to just go out and do it, but I surprised myself with how determined I became once I felt the encouragement to get started. I never thought I would start something of my own so soon” Chen said.

Crowdfunding
It’s expensive to start you own business. Traditionally, finding an investor is one of the very first steps and for women, the hardest. Male business owners are 40% more likely to get venture capital funding than female owners, which is why crowdfunding has been a powerful solution for female entrepreneurs.

Resources like Kickstarter, the crowdfunding phenomenon for aspirational business owners, have changed the game for women, just look to Awerkamp and Killpack, they were able to find funding for their business, The Playground, in mere hours. Funding comes from anyone willing to pledge a little money to see the project through, not just the big guys from venture capitalist firms.

Women have found these outlets and utilized them. On Kickstarter, Women are 61% more likely than men to reach their goals for financial backing, outperforming men in various industries: fashion, tech and services, to name a few.

“Kickstarter was foundational,” said Killpack. “More than half of the funding came from Canada, Europe and Japan. Without the exposure, not just the money, we never would have been able to get where we needed to be to start production.”

''One of the benefits of using Kickstarter is the community. It's a strength to see other women going for it, too.'' Marilee Killpack

Finding funding through alternative, more accessible, means is the key for bridging the gap between men and female-run businesses.

“It launched on a Tuesday and we had over $36,000 in pledge by Thursday. It was a huge miracle. Kickstarter was the only real way we were able to get started.” said Killpack.

Social media
Kickstarter made a business like The Playground doable, proving that the Internet is a hero of new-wave female entrepreneurism.  Besides crowdfunding, social media platforms make up some of the most successful marketing strategies in business today.

Ashley Beyer, owner of Tinge Floral in Salt Lake, has nearly 29,000 followers on Instagram. It’s through her Instagram account that she can showcase her portfolio, attract new clients and gain contacts in the business for potential collaborations.

With the bulk of marketing handled by social media, the art of starting and growing a business becomes remarkably less intimidating. Social media is a ready-made platform with a willing and eager audience on the other end.

Susan Peterson is CEO and founder of Freshly Picked, a Provo company that sells handmade leather moccasins for babies and toddlers. Peterson has appeared on Shark Tank and her moccasins are arguably the preferred footwear of famous babies. She has a cool 401,000 Instagram followers and is considered a maverick in social media marketing. 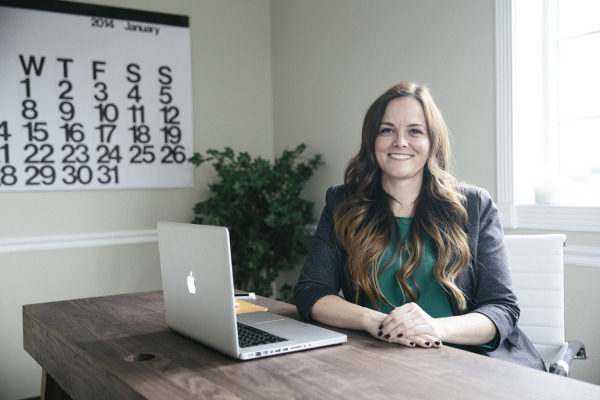 The average value of each follower is $0.31, she reported to fit marketing.com. She uses the platform to post pictures of children wearing Freshly Picked moccasins, announce new products, promote user generated content, stage giveaway promotions, or to let people see what she’s up to.

The great challenge for women in business has always been the career-family balance. Modern entrepreneurship allows for more career flexibility with home life.

Work-life balance
Perhaps most of all, the Internet has helped woman step into the marketplace without leaving the home. The biggest reason women have stayed out of the business game for so long is simple: the work-life balance. How can a business owner start, grow and maintain your own company, all while trying to balance a family and home life?

It’s the question for the ages, but this female-driven entrepreneurial surge has proven there’s a potential answer for it.

Allison Baddley, owner of La Fete, an events company is Salt Lake, started her company two years ago. At that point, she had three small children in tow—not typically considered high-time to start a business.

“Balance is very difficult to achieve especially when there are three kids that I need to put first at all times,” said Baddley. “Organization is key to a successful business and family life. When I’m not organized I feel that things are out of sync.”

Killpack, mother of two and co-founderof The Playground, denied there was any such thing as work-life balance.

“A perfect balance is non-existent, sometimes it’s your life that takes over–laundry, house, kids–and some days it’s the business that needs your attention. You have to take it day by day,” said Killpack.

It’s a juggling act, but female entrepreneurs that have stepped into the business world have stayed, according to statistics. They’re happy.

“It’s really gratifying,” said Killpack. “That’s when you see people really soar, when you’re using your skills to contribute in a way you feel is meaningful.”

(click below for bios on legendary female entrepreneurs through history)

Maddy Fitzgerald is a graduating in journalism from Brigham Young University. She’s originally from Gig Harbor, Washington. She likes to cook, hike and write.

by Bryan Pearson and Hailey Gengler March 23, 2015
Next: Entertainment

Self-publishing: an alternative for independent authors