This article is part of The Y Magazine. See the full first edition here.

For his first three games as a Cougar, highly-touted freshman quarterback Zach Wilson had to watch from the sidelines as senior Tanner Mangum led the Cougars to impressive wins over Arizona and No. 6 Wisconsin. Still, Wilson said he prepared every week as if he was going to start so that when the opportunity came to get playing time, the 19-year-old freshman was able to rise calmly and confidently to the occasion.

Wilson got his first taste of BYU football in the final quarter of a lopsided victory over McNeese State on Sep. 22. Then on Oct. 5 against Utah State, Wilson once again came in for Mangum, this time down by double digits, and threw his first touchdown. It was almost poetic, as Wilson threw to fellow freshman Gunner Romney for the wide receiver’s first BYU touchdown as well. The next game, against Hawai’i, Wilson was the starting quarterback, the youngest in BYU football history.

BYU football is experiencing what is best described as a “youth movement” this year. With injuries and poor performance plaguing many of the upperclassmen, the freshman class has been forced to step up and play a larger role than usual.

BYU has played 25 freshmen this season, and 11 of those have started games for the Cougars. Against Hawai’i on Oct. 13, the team started seven freshmen, including six on offense. To give some context, only Minnesota has started more freshmen on offense in a game, with seven. Freshmen have accounted for just over half of BYU’s total scoring this year with 95 of the Cougars’ 182 total points. 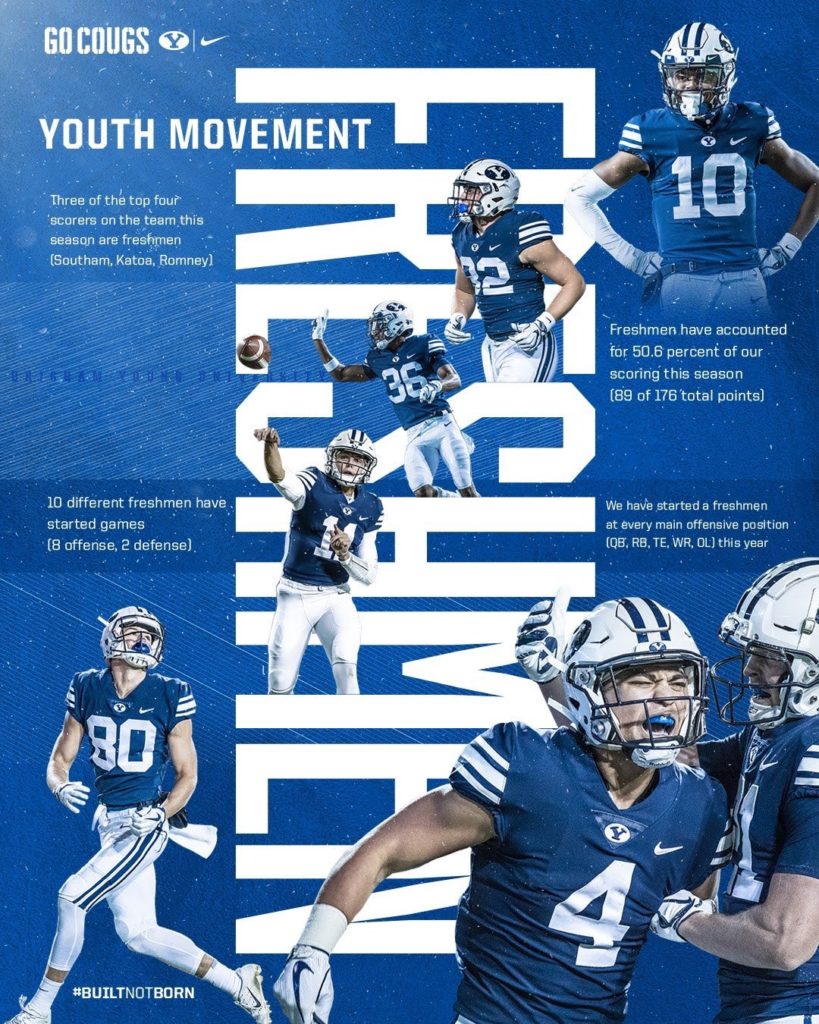 Though he wasn’t the first to start, Wilson has led this movement as the face of the freshman class. Wilson came to BYU as a four-star recruit from Corner Canyon High School in Draper and put on an impressive performance during spring and fall practices to earn the starting spot midway through the season.

Romney traveled a little farther than Wilson to come to BYU, from his hometown of Chandler, Arizona and didn’t know many players on his arrival. This is the case with many first-year players coming to play at BYU, leaving home for the first time and entering the fast-paced world of college football. Luckily, Romney came to a BYU football that prides itself on brotherhood and has joined a tight-knit wide receiver group that features several freshmen, such as Dax Milne, who start alongside him.

“It’s been different, I mean college itself is a lot different from high school,” Milne said.  “BYU is different from other places too. It’s taken me a second but I think I’m adjusting.”

Luckily they are not alone, and just as it happened with Wilson and Romney, the chemistry and connections formed on the field help to create a new bond and brotherhood. Romney was recently featured on a BYUtv special detailing the life of Wilson and said he now considers him to be one of his best friends at BYU, despite not knowing each other prior to this year.

“A good thing about having so many freshmen is we can always ask each other and learn together,” Milne added. “But it’s always in the back of your mind that you’re kind of competing with them.” 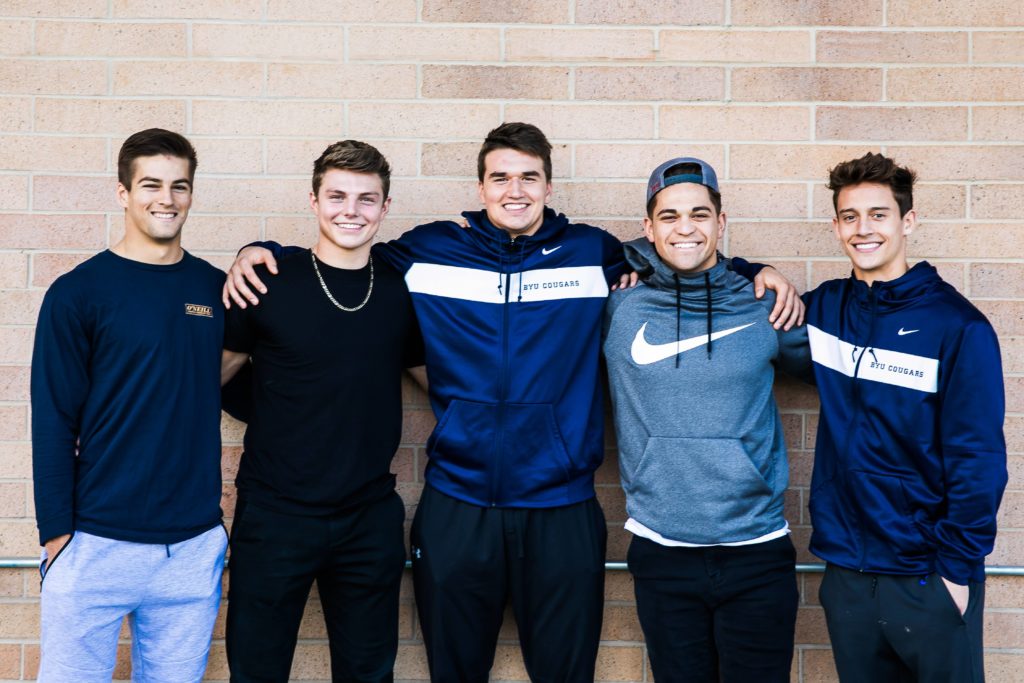 Milne and Romney both started for BYU against McNeese State, and one of the two have started each of the last five games. Milne added that the young wide receiver group, which includes his high school teammate, Brayden Cosper, has gotten help from a fellow starter and team captain Micah Simon.

“He took me and Brayden Cosper in from the very start and just helped us with the playbook,” Milne said. “He has been a good friend to us and I appreciate that.”

Milne attended Bingham High School in South Jordan with Cosper and grew up playing against many of his current BYU teammates, including Wilson. The friendships that already exist among those from Utah have allowed for them to adjust more easily to the college environment and welcome those, such as Romney, who may not be as familiar with the ins and outs of life in the Beehive State.

The group of freshmen from Utah also includes Lopini Katoa and Dallin Holker, both of whom have started for the Cougars and contributed important plays and scoring opportunities for the offense.

“I definitely hoped to play, I thought I had a good chance,” Katoa said of playing early. “I felt like I was getting used to the college game quickly, but I just didn’t know. I knew I would have to fight for (the starting spot) because there are a lot of good running backs. It doesn’t feel like I’m new just because we’ve been going for so long.”

Katoa served a mission before coming to BYU, and redshirted last year, so his freshman experience may not be quite the same as those who were in high school just last year. New NCAA rules allow coaches to play freshmen for up to four games and still redshirt them, opening up new opportunities and a different dynamic for many teams. 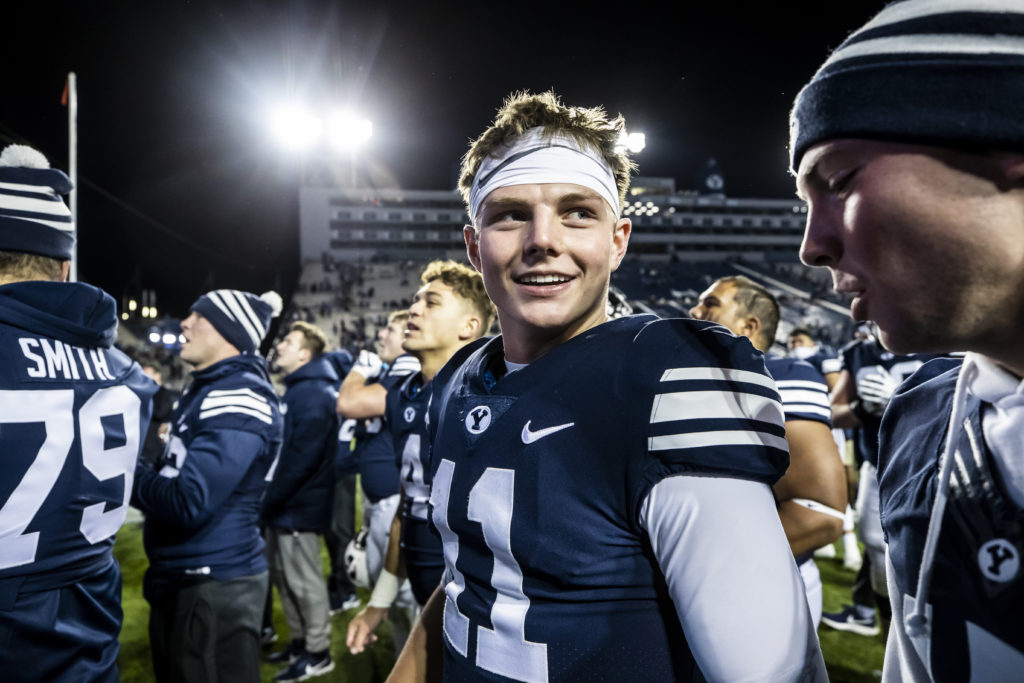 It was not mentioned by coaches whether they planned on redshirting any of the freshmen who have started games this year, but there is no doubt that injuries and underperformance from upperclassmen forced coaches to play more freshmen earlier and in larger roles than initially anticipated.

One unique aspect of the situation at BYU, however, is that the expected starters and more experienced players have willingly given up time on the field and help the younger players for the best interest of the team as a whole. The aforementioned Mangum and Simon both came into the season as team captains and sure-fire starters, looking to lead the team after paying their dues for several years. Midway through the season, however, Simon and Mangum found themselves playing less and cheering on their younger teammates from the sidelines.

Both captains, along with several other upperclassmen who, whether due to injury or playing situation, have gracefully taken a back seat as far as playing time goes and helped make the transition for the youth movement much smoother and efficient. Wilson says he considers Mangum and Simon to be some of his best friends on the team, and the two who have taught him the most as far the college game and how to adjust to his new life on and off the field.

“We’re all super close,” Wilson said. “The older guys who are leaders on the team, we hang out with them a lot.”

The veterans on the team are equally impressed and grateful for the freshmen and surprised by their maturity and ability to adapt and even thrive so quickly at the next level. Following the game against Hawai’i, Wilson’s first start when he threw for three touchdowns and ran in for another, senior Dylan Collie had nothing but praise to heap on the 19-year-old signal caller.

“To come in and play as confident and be as confident as he was, to be honest with you I don’t think a lot of kids could do it,” Collie said. “Zach did it, and he’s going to continue to do it because I know that his preparation will continue to stay the same. I can attest to the fact that he has prepared as if he were a starter since week one. I have a lot of faith in him and I know that everyone else does too.” 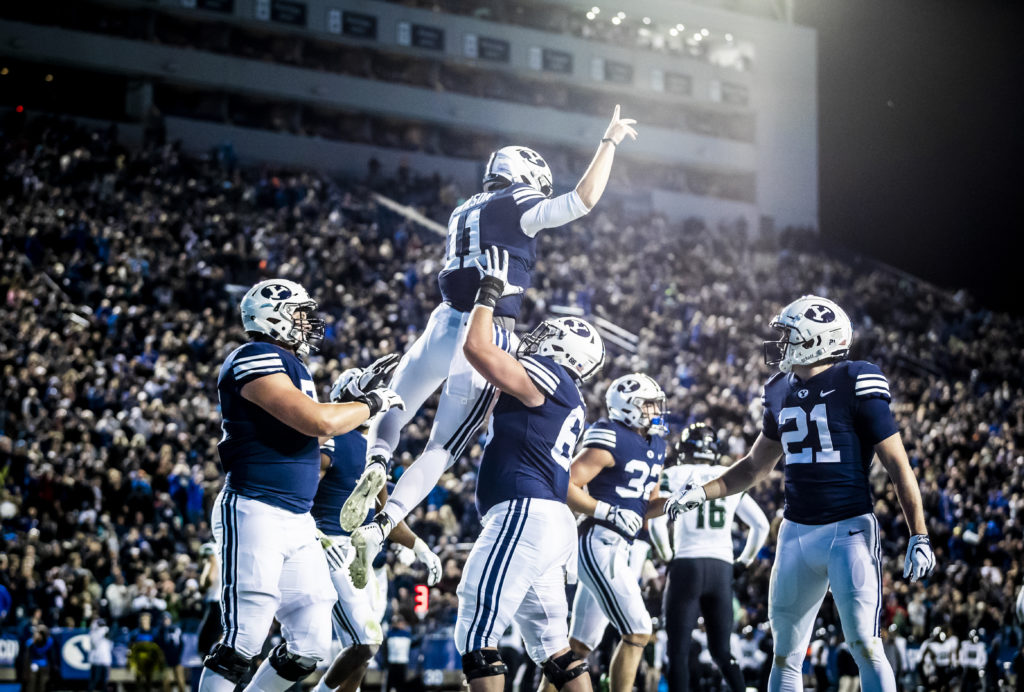 Out of the five freshman starters that have played key roles in the offense, tight end Dallin Holker is the only to have played in every game. A true freshman out of Lehi, Holker came in with a college-ready mind and body, ready to make an impact immediately on the team. He formed part of one of the deepest groups on the offensive side of the ball, playing alongside Freshman All-American Matt Bushman.

When Moroni Laulu-Pututau tore his ACL at UMass, even more opportunities opened up for Holker, and he took advantage. Although his only score came against Hawai’i, he went for 20-plus receiving yards in four of the final five games of the season. He is fourth on the team in total receiving yards with 214 and averages almost 12 yards per catch.

Though the transition hasn’t been perfect and some difficult lessons were learned along the way, the experience gained by these freshmen will be invaluable for themselves and the team going forward. 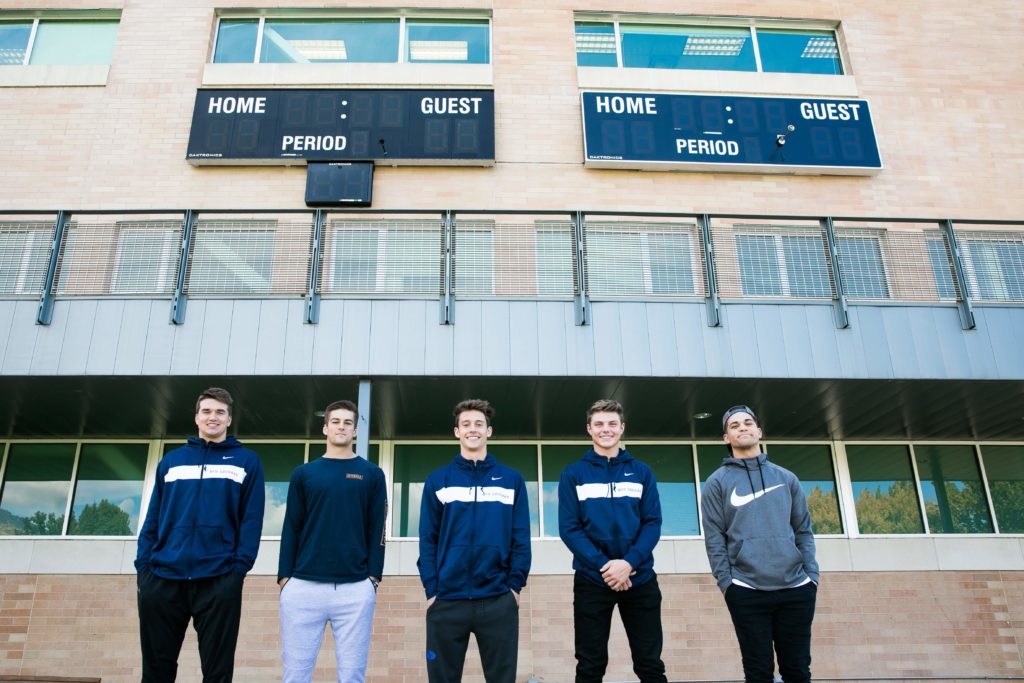 Why America Needs the Fourth Estate by Lauren Malner December 11, 2018
Next: Family and Parenting