You’re in the library plugging away at a religion paper due at midnight. Someone cute walks up and hands you a note with their number on it. You wait the required several days before reaching out (you wouldn’t want to seem overeager). Finally, you go to send them a message only to realize that their messages appear as an unsettling green rather than a comfortable blue. The initial excitement is squelched, and you second guess your decision to reach out. As a columnist for New York Post recently wrote, “Forget dreamy eyes the color of the ocean. For young daters, the color of text messages is all that matters.”

I’m not trying to point fingers. Everyone with an iPhone is not guilty of such an attitude. My intention is to shed light on a troubling trend I have come to notice throughout my time at BYU. This trend is not limited exclusively to dating but rather permeates all different types of social interactions. Every day, people are left out of group chats, unable to video chat with their friends or not seen as part of the in-group, due to owning a different phone from everyone else. One BYU student I spoke with said he felt an in-group/out-group force so strongly his freshman year that he ended up switching phones.

To be fair, part of this stems merely from convenience. There is no doubt functionality between iPhone users that is not replicated with users outside that ecosystem. Pictures and videos shared outside of iMessage are of substantially lower quality, Find my Friends is only available for iPhone, and fun features like read receipts or Memojis are sadly absent when the texts are green. However, viable platform-neutral alternatives such as Facebook Messenger, Google Messages, or WhatsApp exist and offer a similar experience to iMessage. Google Maps offers the same functionality as Find my Friends for anyone with a smartphone. These free and inclusive solutions are seldomly used. As a consequence, when one goes to find their friends or wants to video chat, they will only be presented with fellow iPhone users as options.

This element of exclusivity that comes with owning an iPhone is not an unintended consequence. Apple knows the power of a message color scheme to create an in-group/out-group feeling for its users. Just take a look at this screenshot from an old ad campaign from Apple.com:

While a company attempting to set itself apart from the competition is entirely normal and not necessarily harmful, the cult-like following of Apple can occasionally transform into something more than a mere preference for a particular platform. According to Wikipedia, ethnocentrism is defined as “the belief that one’s own culture is superior to all others and is the standard by which all other cultures should be measured.” When Apple users idealize their platform to the point that all other options are deemed second-rate and users of other platforms are seen as hoodwinked, they are engaging in a sort of ethnocentrism. Ironically, the idea that iPhones are the norm is a fallacy when looked at from a global perspective. According to Statista, as of 2019, Android held an 87% share of the global market with iOS holding onto a mere 13%.

Apart from the “otherizing” power of iPhones on non-iPhone users, one of the most troubling aspects of this phenomenon is that ownership of an iPhone or other Apple products often correlates with socioeconomic status, allowing it to become a sort of marker of class distinction. This is unsurprising looking at the ridiculously inflated prices of some Apple products such as the $700 Mac Pro Wheels kit or the $550 AirPods Max. Apple knows its products function as a status symbol and uses this knowledge to boost its revenue. Unfortunately, this status symbol ostracizes those of lower socioeconomic status. I interpret at a free medical clinic that provides care for people unable to afford health insurance. Patients often take out their phones to write down doctor’s instructions or to take pictures of something to look for at the pharmacy. In over a year of working at the clinic, I cannot recall a single patient pulling out an iPhone. Think about the people in your life and who use iPhones and who don’t. Can you notice any sort of trend?

At times, the world can feel very divided. As a society, we are currently navigating issues pertaining to race, ethnicity, sexual orientation, gender, and differing political ideologies or religious affiliations. These issues are complex, nuanced, and offer no immediate, easy solutions. Nevertheless, we are tasked with grappling with them in a Christ-like way. A recent update to the Church of Jesus Christ of Latter-day Saints’ general handbook offered this imperative (italics added). “The Church calls on all people to abandon attitudes and actions of prejudice toward any group or individual. Members of the Church should lead out in promoting respect for all of God’s children. Members follow the Savior’s commandment to love others (see Matthew 22:35–39). They strive to be persons of goodwill toward all, rejecting prejudice of any kind. This includes prejudice based on race, ethnicity, nationality, tribe, gender, age, disability, socioeconomic status, religious belief or non-belief, and sexual orientation.”

How can we expect ourselves to live up to such an objective if we insist upon dividing ourselves by something as insignificant as the color of messages on a smartphone? We can do better. I’m not asking you to give up iMessage. I’m not trying to vilify anyone who owns an iPhone. My intention is rather to encourage each one of us to introspect and look for trivial ways that we attempt to divide ourselves from our fellow brothers and sisters. This could be someone’s message color, or it could be the contents of their Spotify wrapped. We can separate ourselves based upon the jersey we wear to a sporting event, or what color of shirt we wear to church. If we can figure out how to move beyond such insignificant differences, we will be better prepared and able to approach the serious issues that attempt to divide us.

P.S. If you’re an iPhone user and want to know how to message even non-iPhone users off of your laptop, check this out.

If you can’t text non-iPhone users when you don’t have cell service, just turn on Wi-Fi Calling which will let you text over Wi-Fi.

If you’re an Android user who is tired of being left out of group chats, check out how to set up iMessage on an Android. Disclaimer: It’s a bit complicated and probably not worth it. 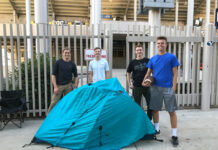 Opinion: The ROC needs to stoke the camping fire for football