Provo’s Covey Center for the Arts is showing the musical “Ordinary Days” on March 26 and 27.

“Ordinary Days,” a musical about four New Yorkers who cross paths and teach each other to see beauty in the unremarkable, is directed and produced by Andrew Jefferies.

“Most of the messages and scenes throughout the show have to do with beauty and purpose in life and how much love can impact a life of even a stranger,” Jefferies said.

Jefferies said he used a minimalist approach in the lighting, costumes and set, which allows the audience to focus on the characters and the messages they teach.

“Andrew is just doing a spectacular job,” said Jimmy Henderson, who plays a 20-year-old gay art lover named Warren. “I know this is a show that is really personal to him. I think that really comes through in the vision of how he’s directed us and how we’ve talked through each character and each scene.”

Henderson is joined in the cast by three other performers. The actors all knew each other before this show, which they said gives them a sense of camaraderie that comes through on stage.

Nikole York plays Claire, a 30-something woman who struggles with vulnerability and carving out space in her life for her boyfriend, Jason.

York said her character teaches audiences that “we have to find the beauty in those days that are in between the big moments in our lives, and acknowledging that every day can be special and beautiful if you let it.”

“What draws me to the show is that it talks about people and circumstances that are more commonplace than your average musical,” Huff said. “These are situations that many people will find themselves in, and it brings out the connection that humans have to each other in a much more grounded reality kind of way.”

“Ordinary Days” will be performed in the Britton Dance Studio at the Covey Center. Because of recent COVID-19 updates which moved Utah County to a moderate transmission area, the studio can fill to capacity with patrons sitting shoulder-to-shoulder. Patrons are still required to wear masks.

“It’s pretty amazing that we have the opportunity to share (this show) especially because we have been in COVID season for so long,” Huff said. “It’s a great way to start getting back to the theater to see things in a safe space, in a space that is taking COVID precautions but will still leave you feeling inspired.”

Tickets for Ordinary Days are now available for purchase for March 26 and 27 at 7 p.m. 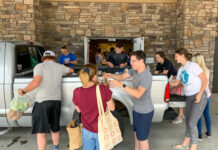