Editor’s Note: This story has been updated.

Imagine being obsessed with your personal worthiness before God — a captive to compulsive thoughts that require engaging in excessive religious behavior to cope. Imagine being weighed down with the constant need to confess sinful behavior to an ecclesiastical leader and unable to accept anything less than perfection.

For individuals with scrupulosity, this is a reality.

Falling under the umbrella of obsessive compulsive disorder (OCD), scrupulosity — also referred to as “religious OCD” — is an obsession involving religious or moral matters. Scrupulous individuals are overly concerned that their thoughts or actions might be considered sinful or violate moral doctrine.

“Scrupulosity expects you to be more Catholic than the pope,” said Jeremy Reschke, a BYU student from Alpine, Utah.

Reschke noticed scrupulous symptoms in himself from a young age and was officially diagnosed with OCD in the ninth grade. He recalled one night when he was burdened with an unrelenting notion to read the scriptures all night long. His mind became overcrowded with conflicting thoughts like, “this is a good thing to do,” or, “this doesn’t make sense,” or, “if I don’t do this, bad things will happen.”

“This is how my OCD was manifest, in that religious sense,” Reschke said. “I’ve considered myself to be a very religious, spiritual, philosophical person, where I tend to think about things deeply. That’s why scrupulosity was so effective at infiltrating my life.”

Other symptoms Reschke portrayed were confessing to his bishop every time he had a bad thought, avoiding reading scriptures about Satan and having a fear of the number six.

“If I had a blasphemous or violent thought during my scripture study, I couldn’t count that toward my spiritual progression at all,” Reschke said.

Socializing became extremely difficult during Reschke’s high school years and he soon fell into a cycle of depression. Furthermore, his scrupulous symptoms led him to misinterpret the chemical imbalance in his brain as something being wrong with his spirit.

Reschke isn’t the only one. According to Annabella Hagen, the clinical director of Mindset Family Therapy in Provo, most of their clients who deal with scrupulosity are college students between the ages of 18 and 26. 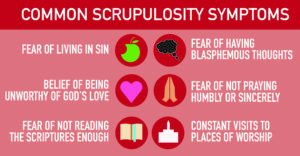 Scrupulosity among members of the Church

Although there has been a limited amount of research among Latter-day Saint samples, some of that research shows moderately elevated levels of scrupulosity among members of the Church compared to other religious groups.

A University of Pennsylvania study involving 197 college students attempted to compare scrupulous tendencies among various religious groups using the Penn Inventory of Scrupulosity (PIOS) as a form of measurement. The main religious groups represented among the students were Protestants, Catholics and Jews, in which the Protestants scored the highest.

In a separate research study, psychology scholar and BYU professor Kawika Allen and a team of researchers administered the PIOS test to 267 Latter-day Saints. Across various denominations, members of the Church were among some of the religious groups that scored moderately higher than others – an inference made by student researcher Eli Baughan. However, we need to be careful in comparing scrupulosity scores because scrupulous tendencies may vary across religious groups, Allen said.

In another of Allen’s studies, his research suggests that striving for family perfectionism is a possible implication of scrupulous behavior among Church members.

“Sometimes maladaptive family perfectionism is manifest in our interpersonal relationships through our communication, behaviors and other ways of relating to each other within our families,” Allen said. “When this occurs repeatedly, scrupulosity surfaces as another unhealthy factor in our families and often intensifies the maladaptive family perfectionism.”

As part of his research, Allen took the approach of exploring “legalism” in relation to scrupulosity.

“Legalism is one’s notion that they have to earn God’s favor and love in order to be worthy. It’s the works of faith and grace,” Allen said. “People with scrupulosity believe, ‘if I do more, I’ll feel better about myself.'”

According to Hagen, Latter-day Saints with scrupulous tendencies may believe they are falling short in church-related areas like missionary work, humble and sincere prayer, service, ministering and temple attendance.

“Individuals struggling with scrupulosity may believe that they are not doing enough and continually question their intentions and behavior,” Hagen said.

The striving for perfectionism is a haunting reality for Reschke, who said the natural tendency for someone with scrupulosity is to be over-religious out of compulsion rather than a love for deity — to pray more or read scriptures out of fear rather than faith. Over the years, however, Reschke has found resources to help him cope with scrupulosity.

Clinical treatments for individuals with scrupulosity are similar to those used on OCD patients. According to Hagen, the preferred form of treatment is cognitive behavior therapy because the behavioral part of this method helps patients face their fears and respond differently than they have in the past.

“We help clients understand that the goal of the treatment is not to ‘get rid’ of internal events like thoughts, memories, images, feelings, sensations and urges,” Hagen said. “There is no delete button in our bodies and minds. We cannot control internal events the way we do some external situations.”

Hagen said with the right kind of treatment, individuals are able to act on life instead of being acted upon by their scrupulous minds.

For some individuals like Reschke, the very thing their fears are centered on can also be a source of help and healing.

Reschke grew up perceiving God as an authoritarian figure who put judgment and justice before mercy and love. He later realized this perception of God was not an accurate reflection of the one he’s believed in his whole life. Raised in a family of active members of the Church, Reschke grew up going to Sunday services every week and reading scriptures with his family every night.

“There’s so many things that I’ve used from the gospel that have helped me cope and even extend benefits better than some medication,” Reschke said. “My symptoms became easier to deal with the more I learned about relying on the Savior.”

Allen hopes his research will help improve the lives of those living with scrupulosity and posed the question of how scientists, practitioners, therapists and ecclesiastical leaders could better come to their aid.

“We care, we love and we’re compassionate toward these people. How do we alleviate these rates of scrupulosity and maladaptive perfectionism and shift the way we teach and invite people to come unto Christ?” Allen said. “It’s about helping people come unto Christ in a more imperfect way and still feel loved by God.”