The signs were there. While working at his store, he would ask customers how much change he owed them, and then double-check to see whether the amount was right. He would tell people he forgot his glasses even though he wore contacts. When he was driving, he would pull off to the side of the road for unknown reasons, only to turn around and go back home.

In August of 1999, Seegmiller’s observations were confirmed when her husband was diagnosed with the early stages of Alzheimer’s, or “Big Al” as they would call it. Seegmiller, who dealt with her own health challenges prior to Craig’s diagnosis, told him, “Do you realize how blessed we are? You got to help take care of me and now I get to help take care of you. Now, you’re going to take two white pills and you’ll be perfect.”

She gave Craig two white aspirins and he was convinced that everything would be OK.

“He thought we were going to grow old together and he was going to be perfect,” Seegmiller said. “‘Words are medicine,’ I tell people. You tell them everything they need to hear and you live in their world, because they’re not a part of your world anymore.” 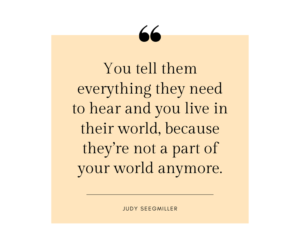 The ongoing fight against Alzheimer’s

That is the very nature of Alzheimer’s disease: a progressive disorder that causes brain cells to waste away and die, slowly destroying memory and thinking skills. Nancy Reagan famously referred to it as the “long goodbye,” the disease that takes someone away slowly, painfully, bit by bit.

There are currently 5.8 million people in the United States who suffer from Alzheimer’s disease. It is also the sixth leading cause of death among Americans.

According to Perry Ridge, an Alzheimer’s researcher and BYU biology professor, as the generation of baby boomers move into the age range where they’re more prone to Alzheimer’s, the numbers of those who suffer from the disease are expected to skyrocket in the next 50 years.

Ridge, along with other faculty members and researchers at BYU, is actively involved in projects to better understand the disease and work toward finding a cure.

“Currently we have about a thousand whole genomes from different individuals, and we’re able to go through those to identify genetic markers that influence risk for Alzheimer’s disease,” Ridge said.

John Kauwe is also an Alzheimer’s researcher and has worked with the BYU community for 10 years. In addition to teaching biology courses and doing research, he travels all over the world talking about Alzheimer’s disease genetics.

Through campus resources like the DNA Sequencing Center and the Office of Research Computing, Ridge, Kauwe and other researchers recently discovered a genetic change to a gene called RAB10, which confers a large protective effect for people who have the potential to develop Alzheimer’s disease. While a good portion of Alzheimer’s research is focused on exploring the causes of the disease, this team decided to take a different approach.

“We were focusing more on what we can do to prevent disease and why some people are more resilient to aging than others,” Ridge said.

BYU researchers focus primarily on basic research and understanding of the science of disease. According to Kauwe, it often takes many years to translate findings into therapeutic interventions.

“The direct impact on people is not generally the curing of a disease,” Kauwe said. “Instead, those who participate in our research are impacted by knowing that they are contributing to efforts that will lead to a cure in the future.”

Kauwe said he hopes each step toward finding a cure will help empower those who are suffering from the challenging and currently untreatable Alzheimer’s disease.

The high cost of Alzheimer’s

The physical and emotional cost of Alzheimer’s on family members is also extremely high. According to Ridge, when someone gets the disease, oftentimes the primary caretaker is the elderly spouse who is not equipped physically or emotionally to care for someone 24/7.

“Frequently, they’ll drain their savings, their retirement money, to try and take care of their ill spouse so they sacrifice their own well-being,” Ridge said. “It’s a complex disease and it’s difficult to understand.”

The cost in the United States will be $290 billion in 2019 for the research and treatments for Alzheimer’s disease and other dementias. This number is predicted to increase as high as $1.1 trillion in 2050 as the population ages and the disease becomes more prevalent.

Many researchers, medical specialists and volunteers are devoting their time and efforts to offset the high cost of Alzheimer’s in hopes that less families will have to deal with the financial and emotional turmoil it brings.

Since starting her personal journey helping her husband face “Big Al,” Seegmiller has devoted her life to helping others cope with this difficult disease. She has led several caregiver support groups and written a book while continuing to speak about her caregiving experiences to students and faculty members at BYU, University of Utah and Utah State University. She also encourages people to find joy and gratitude in the journey.

“If our eyes didn’t have tears, our hearts wouldn’t have any rainbows,” Seegmiller said. “Involve others in the journey. It enriches their lives, enriches yours and creates awareness.”