BYU senior Joshua Palmer rapped for 30 hours and eight seconds to break the Guinness World Record for the longest rap marathon on Nov. 14 and 15 at Lowes Xtreme Air Sports.

After 30 hours of freestyling and rapping original songs, the “Bee Movie” script and songs from well-known rappers like Eminem and Drake, Palmer’s voice was gone — but he said it was worth it.

“Other than my voice, it wasn’t that bad,” he said.

The previous record was 25 hours, 56 minutes and 4 seconds and stood for over two years.

Palmer’s roommate Braden Smith said Palmer had been practicing in their apartment leading up to his attempt.

“He’s been doing it pretty consistently for like the last month,” Smith said. “He’s been pretty serious about this.”

Mindy Riding and Jordan Anderton heard about the attempt on social media and came to support the rap aficionado. They watched as he passed the six-hour mark while rapping “The Hobbit.”

Riding said she was inspired to break her own world record.

Guinness World Records requires every attempt to be witnessed by at least two people at all times, so Palmer’s friends and family members rotated in and out to watch him break the record.

Lowes Xtreme Air Sports hosted the event for the full 30 hours, and onlookers stopped to ask Palmer questions, which he answered to the beat.

“Thank you for being here,” Palmer rapped. “Hopefully it’s not a chore to sit and watch.”

Palmer’s family drove up from Cedar City, Utah to support him as he broke the record. His dad, David Palmer, said they weren’t sure if he would be able to do it.

“This is really tough, and he just finds a way to do it,” David Palmer said. “Right now we’re very proud of him.”

Palmer said it feels cool to have broken the record, but he’s not sure how long he will hold the title.

“My guess is that if this gets out, this will be broken in like a month,” Palmer said. 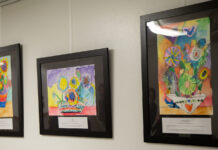