Thousands of volunteers staple streamers to floats and don colonial costumes in preparation for the festival. In just a few days Provo will come alive to celebrate America’s freedom with lots of food, fun activities and hundreds of people from all over the country.

Dating back to the 1870’s, this Freedom Festival has been recognized as one of America’s biggest and best patriotic celebrations.

The festivities officially begin on July 2 with the Freedom Awards Gala.

According to their website, those honored this year have given meaning and depth to the word “freedom,” which took “them (those honored) from the pages of a dictionary into our hearts and souls.”

The gala is an opportunity for the community to give back to those who have sacrificed to defend their country. The Freedom Awards Gala will be at 6:30 pm at the Utah Valley Convention Center in Provo. Tickets for this event are no longer available.

As part of Freedom Days, visitors can attend a free art show at the Historic Utah County Courthouse on July 3 from 5-9 p.m. and July 4 from 11 a.m.-6 p.m.

This year’s show will display original artwork of about 22 artists, some nationally acclaimed. Visitors can also see live demonstrations and purchase original and printed works. Coordinators of the event said this art is an important part of Utah heritage.

Clog America will be performing on July 3 at 7 p.m. at the Orchard at University Place and will be joined by local performing groups at 4 p.m.

Clog America is in its 28th year of touring as U.S. Goodwill Ambassadors, and are America’s premier folk dance ensemble. The group has represented the U.S. in prestigious international folk festivals throughout the world.

If clogging inspires you to get up and move, you can join hundreds of others in the Freedom Run on July 4 at 7 a.m. beginning at Kiwanis Park in Provo.

This year approximately 5,500 runners will participate in the 5K, 10K or the Mayor’s 1-mile fun run.

Best way to run? Dress patriotic and have fun. Runners are encouraged to deck themselves in patriotic colors, patterns and themes.

Gracing the skies again this year is the annual Balloon Fest, taking off from the Bulldog Field at 6 a.m. on July 4-6. Spectators can watch the 31 balloons inflate and take to the skies until they safely return back to solid ground at 8 a.m.

Balloons returning to the field with their pilots this year are the Road Runner, Tick Tock, Sumo Fiber, Coke, Smokey the Bear, and Heart. A few of these balloons will be available for tethered rides (for kids 14 and under) on the BYU field by the old Provo High School.

Twenty-five volunteers work with the pilots on the tether field and are continually looking for extra help in sending off and securing the balloons. The committee who gathers the volunteers also arrange for the pilots to attend and participate. According to organizer Susan Bramble, the only reason the pilots come out every year “is because they love to fly.”

Another draw for the pilots is the annual Hare and Hound Competition. The first balloon takes off as the “hare” and leads the other balloons to a marked spot where they attempt to drop bean bags. Spectators watch and cheer for the pilot that gets closest to the target.

A new addition to the balloon fest is a free nighttime spectacle: eight hot air balloons, like Chinese paper lanterns, all igniting their fire burners in synchronization to music. Bramble said this unique event is something everyone should experience.

It will take place on Friday, July 5, from 9-10 p.m. in the intramural field at BYU, just west of LaVell Edwards Stadium. Guests can watch the balloons inflate at 8:30 p.m.

Get blasted back in time by the boom of black powder cannons at the Colonial Heritage Festival where volunteers “bring history face-to-face” with colonial reenactments, historical demonstrations and food.

This authentic colonial village will be open to the public from July 4-6 from 9 a.m.-6 p.m. at the SCERA Park in Orem. Colonial Heritage Festival founder Greg Hardy said the festival gives people “a personal view of what it was like to live during the Revolutionary period.”

Forty-eight hours before the event, 150 volunteers from all over the country set up the village, which includes both a British and an American military encampment and a frontier area with around 60 booths demonstrating how to make brooms, pottery, clothing and bread. Once the village comes to life, guests can interact with the volunteers, learn about American history, witness black powder demonstrations and attend a realistic colonial children’s school.

Chairperson Kim Gardner said people will “come away with a newfound love and appreciation for the people that have helped our country grow to what it is now and the sacrifices they made and the hard work that was put into it. We take so much for granted.”

Bre Cornell, a chairperson for the event, announced the new programming that will accompany this year’s many activities already available.

“History is not black and white as we’d like to believe,” Cornell said. “There are different views and different perspectives.”

These new programs will highlight different cultures and backgrounds in order to help attendees understand different perspectives of history. Visitors will also be able to speak and interact with actors portraying the Founding Fathers. Guests may even spot founder Greg Hardy portraying Benjamin Franklin.

And if that isn’t enough, this year’s guests can take part in an actual wedding. Meagan Pinales and Edward Burns, who got engaged last year at the festival, requested to come back to tie the knot. And none other than George Washington will officiate the ceremony. Guests can witness the nuptials and be a part of the old-fashioned celebration on July 5 at 2 p.m. in the American Camp.

Preparation for The Grand Parade starts in early January as ideas are passed around and entry applications are created. As one of the most highly anticipated events at the Freedom Festival in Provo, the parade committee members work tirelessly to make it perfect.

Fast forward just days before the event, locals are beginning to stake out their spots to get a good view of the floats and performers.

On July 4 at 9 a.m., the parade will follow the same route its taken for the last 10 years down University Avenue and Center Street in Provo. This year’s theme is “America the Beautiful.” Organizer Terry Kennard said they chose this theme in honor of the beauty of the nation’s people in addition to America’s physical beauty.

Joining this year’s parade are over 400 participants and upwards of 2,000 volunteers. Among those participating, the cities of Provo, Orem, Lindon, Pleasant Grove, Payson, Salt Lake, Lehi, Eagle Mountain, Springville, Mapleton and Spanish Fork will all be represented by royalty floats.

The largest event of the Freedom Festival happens on July 4 at 8 p.m. at the LaVell Edwards Stadium in Provo. The Stadium of Fire has been around for 31 years and always includes performances by stars like The Osmonds, The Beach Boys, Carrie Underwood, Kelly Clarkson and OneRepublic.

This year an anticipated 50,000 guests will filter into the stadium to watch the newly-crowned 2019 ACM Entertainer of the Year, Keith Urban, perform. Also performing will be actor Chuck Norris. 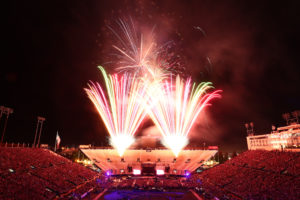 Later that evening, the sky will explode with the largest stadium fireworks display in America followed by a free family street dance party.