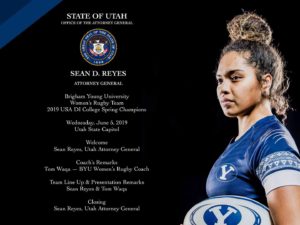 “The Utah Attorney General’s Office congratulates the BYU women’s rugby team for winning this national championship and inspiring youth, and young women in particular, to further their educational goals, work hard, play by the rules and become winners on the field, in the classroom and in life,” Reyes said at a commendation ceremony on June 5.

Reyes acknowledged the uniqueness of the team, using his own example of being the first elected minority official, and reminded the women of the responsibility that comes with that.

“You have with your success some responsibility,” Reyes said. “All of you are unique in many ways … with that, again, there is a responsibility. That’s one that you all carry with you wherever you go. You’re champions, and you need to remember that. Comport yourself that way.”

Reyes told many engaging and meaningful stories about his personal experiences and his family. He talked specifically about his great uncle, former Philippine President Ramon Magsaysay, and his father, who immigrated to the United States from the Philippines. The unifying theme of these stories was love.

“In life, there are lots of things that can divide us, but the one thing that can absolutely unite us, and what I hope you will continue to embody as you go out as international ambassadors of BYU and the women’s rugby team, is love,” Reyes said. “I think that principle and power, that attribute of the Savior, can help lift so many people out of the suffering that they have, out of the darkness.”

Because of their success, Reyes highlighted the influence the players can have through love on those who are struggling. He encouraged them to be Christ-like examples.

“Face it, now with the platform you have, you’re champions and you can walk into a room and command attention and respect,” Reyes said. “It’s incumbent on you to continue to reflect the love of the Savior so much that those who don’t know Him, who know you, will want to know Him because they know you.”

During the ceremony, Head Coach Tom Waqa made his way to the podium. He began by expressing his pride and gratitude for the women of the team.

Waqa then expressed his gratitude for his own story. He said he grew up in the islands of Fiji and came to the United States to get a good education. Waqa earned a bachelor’s degree in computer information systems from BYU-Hawaii in 2001.

Waqa and the players showed their appreciation to Reyes by presenting him a signed BYU rugby ball and a national championship medal. Reyes then presented Waqa with a certificate of commendation from his office.

A representative from the Utah Warriors, a professional rugby union team based in Salt Lake City, was also in attendance. He presented the team with a Warriors rugby ball in honor of their performance this season. The Cougars were previously recognized during a Warriors game on May 18.

Reyes presented each player with a certificate of commendation to conclude the ceremony. He then escorted the team and family members in attendance around his office and the Capitol Building to round out the evening.