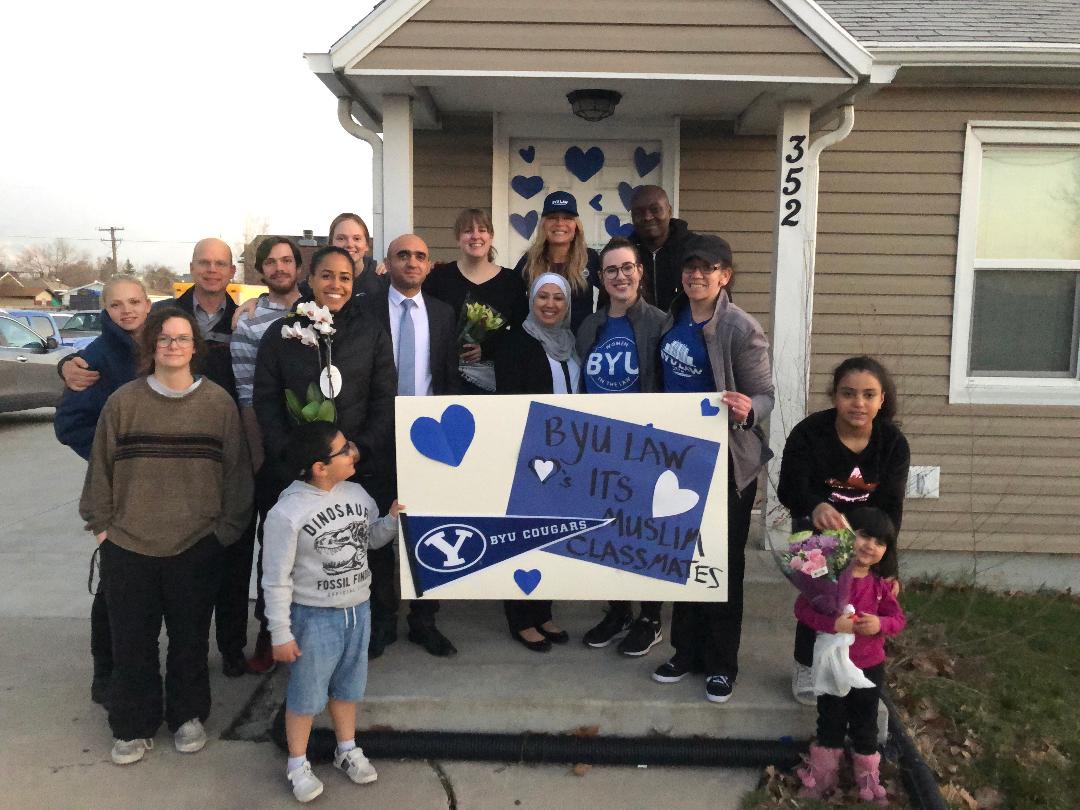 It started with a text on March 16: “You and I are taking flowers to the Al Sahaba Mosque today if Farah says it’s appropriate.”

The text, sent from BYU law student Camille Bailey Aagard to her classmate Rhonda Peck, came a day after 50 people were killed in two New Zealand mosques on March 15.

After the tragedy in New Zealand, Aagard and Peck arranged for fellow law students to attend a worship service with their Muslim classmate Farah Odebat at the Orem Islamic Center, an action that started a pattern in the law school of kindness, support and solidarity for religious diversity.

The BYU Law students presented their classmates with flowers and a “heart attack” on the front door of the Islamic Center, plastering it with heart-shaped notes of love and support.

Aagard said she gained an appreciation for their devotion to their faith and for the dedication it takes to pray five times a day.
“Even more meaningful for me was the ability to stand in solidarity with our Muslim classmates,” Aagard said. “I suspect they feel significantly marginalized at times, so it was wonderful to put our arms around them — figuratively and literally.”
Aagard said she became far more curious about Odebat after doing a face-to-face exercise in BYU professor Benjamin Cook’s meditation class.
“On the first day of class I have students pair up with someone they don’t already know and stand across from them,” Cook said. “This is commonly called loving-kindness meditation. They stare at the other person without talking for one minute.”
According to Cook, it is awkward for nearly anyone to do. After a minute of staring, Cook reads statements for the students to think about the person across from.
“This person has a body and mind just like me. They have been sad, hurt or confused, just like me,” Cook said. “I want this person to be free from pain and suffering because they are a person, just like me.”
Cook said this exercise is commonly done as part of classes, workshops and conferences for lawyers.

“In maybe two minutes or less, they feel an outpouring of love for a person they knew nothing about,” Cook said. “It connects them and helps them recognize fundamental humanity.”

Aagard experienced this connection with Odebat after doing the face-to-face activity with her.

“I had been judgmental of veiled women, assuming they were complicit in their own patriarchal repression,” Aagard said. “However, I had overlooked something rather obvious: Farah is a judge in Jordan.”

Aagard added Odebat has four young children and has been living in Provo with them, away from her husband, for almost a full year.

“This is a woman who had the courage to uproot her kids, travel to a foreign country while leaving her husband behind and attend law school in a foreign tongue,” Aagard said. “I can’t even process the frightening prospect that last factor alone would be for me.”

Aagard learned from the experience and gained respect for Odebat from a quick two-minute exercise.

“It’s quite possible that my veiled Muslim classmate is one of the fiercest, bravest women I have ever had the privilege to know,” Aagard said.

Student Bar Association president Rhonda Peck was by Aagard and Odebat’s sides as they worshipped together.
“I am Jewish and a believing member of The Church of Jesus Christ of Latter-day Saints,” Peck said. “Growing up in a dual-religious household has taught me the power of acceptance and to see other points of view.”
Peck has encouraged inclusivity throughout her time as Student Bar Association president in numerous different ways. In February, she established Diversity Week at the law school.
“Over two weeks there were whiteboards in the Memorial Lounge for students to share why they value diversity,” Peck said. “There were speakers, panels and a reusable water bottle initiative to reduce our waste and impact on underrepresented minority groups.”
In addition to implementing Diversity Week, Peck sits on the Law and Religion Center’s annual symposium executive committee.
“I feel this is my way to contribute to religious freedom around the world while I attend BYU Law,” Peck said.
The executive committee of about 20 law school students coordinates a week-long symposium for delegates from around the world to come together, create friendship and connections and be more inclusive of others religious backgrounds, Peck said.
Aagard has kept a journal about what she has learned and read in law school classes throughout the semester.
Aagard spoke of reading “Difficult Conversations” as a part of her class readings, which caused her to “take a hard look in the mirror.”
“Difficult conversations are not about what is true; rather, they are about what is important,” Aagard said. “Focusing instead on perceptions, interpretations and values frees us from having to win. Rather than delivering a message, we explore how the other side is making sense of the world. We replace certainty with curiosity.”
Aagard said she believes everyone can be more inclusive by “moving through the world with less certainty and more curiosity.”
Peck said there is always more that can be done to be more inclusive.
“It comes by noticing those around us,” Peck said. “An outward mindset is needed to see others as people and be willing to listen and do the things we know we should do for others; it’s living the platinum rule.”
Being inclusive is taking the time to self-reflect and seek ways to see the forgotten man and look out for him, she said.