The season opener for BYU women’s tennis featured a hard-fought match between the Cougars and the Wildcats of Weber State, with BYU clinching a 5-2 victory. Sophomore Anastasia Abramyan and junior Polina Malykh won two key matches in the singles division.

In many ways, Abramyan and Malykh are just like other student athletes at BYU. Abramyan hopes to be admitted to the public relations program, the same program Malykh is in. Both work hard to balance school and tennis. They frequently visit Cafe Rio and enjoy tacos. Abramyan loves Utah Valley’s mountains. Malykh drinks Dr. Pepper religiously.

Two Russians playing tennis for a Church school in Utah Valley, a unique case, offers an interesting peek into the European athletic system.

Just as they do in the U.S., many athletes begin playing sports at an early age. Abramyan began tennis as a way to round out her education.

“I started playing tennis when I was seven,” she said. “My parents just wanted me to do something besides school for fun.”

Malykh found the sport through her older brother.

“Because I was younger, I would spend all of my time with (my brother),” she said. “The coach asked me if I wanted to try it, and the rest is history.”

When athletes like Abramyan and Malykh choose to focus on their education, they enlist the help of a sports agency to help them find a school where their abilities could act as a gateway to colleges around the world. Abramyan and Malykh both used the services of an agency named 4RSport.

Athletes provide agencies like 4RSport with everything from their standardized test results and grades to their sports rankings and records. The agency uses that information to determine everything from the division in which the athletes should compete to the size of the school that best fits the athlete’s academic needs. Agencies take the results and reach out to schools to arrange campus visits for the athletes. These agencies also help to provide equivalency for school certifications so they remain valid from country to country.

After campus visits and meetups with potential coaches, Abramyan and Malykh still had to decide on a school. While BYU appeared to be a somewhat puzzling choice at first glance, both Abramyan and Malykh agree that there couldn’t have been a better fit.

“I made my visit and I really loved the environment and people here,” Abramyan said. “I feel safe here. That’s why I came.”

Malykh added a full-ride scholarship made the decision easier, too.

Abramyan and Malykh aren’t the only ones who think BYU’s a great fit. Head coach Holly Hasler said she has grown fond of the two athletes during her time with them.

“Our team chemistry would not be the same without Polina and Anastasia,” she said. “We are lucky to have them at BYU.”

Coach Hasler praised Abramyan and Malykh’s competitive spirit and passion for tennis. She said they also work fantastically in a team setting.

“The Russians are fighters. Their mindset is competitive and they never give up,” Hasler said.

While Abramyan and Malykh are just as worried these days about tests, papers and projects, their love of tennis hasn’t diminished at all during their time at BYU. Tennis provides them with a valuable outlet and diversion to supplement their education.

Malykh says that when she’s on the court, her mind can be clear, even if just for a short amount of time. She summed up what that time is like as she steps onto the court.

“It’s just you, the ball, the racket,” Malykh said, “and the girl whose butt you have to kick.” 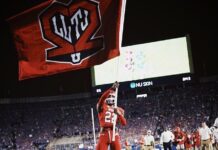 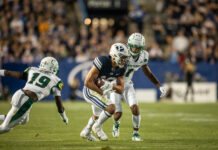